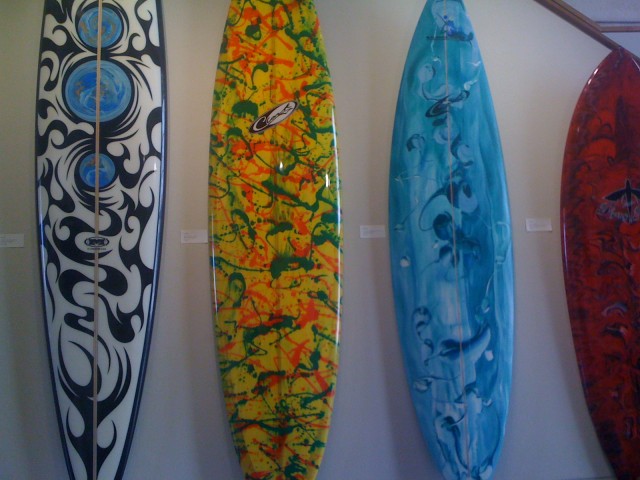 On Saturday, Max and I went to see Pipeline: Art, Surfing, and the Ocean Environment, an exhibit at the SFMOMA Artists Gallery at Fort Mason showing July 16 – August 28, 2009.

Also featured are surfboards by Jeff Clark and surf photography by Frank Quirarte and Doug Acton.

For me, the main draw was to see surfboards by Jeff Clark, the pioneering Northern California big wave surfer that discovered Mavericks, one of the largest big wave breaks on the planet. He also surfed it alone for 15 years before convincing others to join him. “Part hydro-dynamic science, part sculpture and painting, and part good old American tinkering, Clark’s approach to shaping is also interesting for its parallels to art-making.” On view were shortboards, longboards and guns. I loved seeing the big wave guns, as well as the red patterned longboard and striped “Mexican rug” board.

Stop by the gallery at Fort Mason next Saturday, Aug 22 at 1 pm to hear Jeff Clark and the surf photographers Doug Acton and Frank Quirarte talk about the famous break and what it’s really like from those that have been there for over a decade. Also read Jeff”s post to learn what happened with Mavericks Surf Ventures and the contest. I got a chance to see the incredible contest a couple years ago when he was still contest director. I hope we all get another chance to support him instead of the corporation that’s taken over his rightfully-earned position.