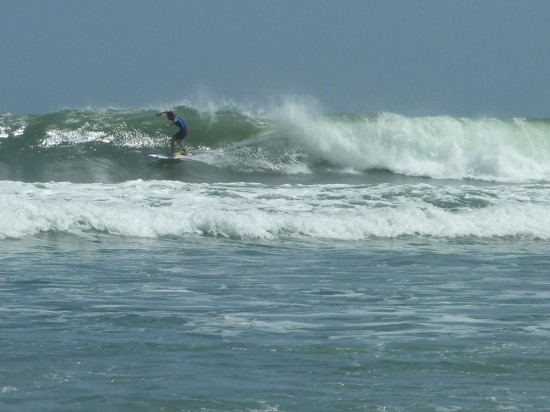 Today can only be described in my mind as epic. In a two hour period of surf, I experienced the most variety of surf I’ve ever encountered, including one crazy HH wave, two amazing rights, my most extreme wipeout, and more fast small waves than I could count. After getting our 7′ boards from Frank at Pro Surf in the late afternoon, we paddled out during rising high tide at Legian. Conditions were good with light winds and a rising SW swell.

The great thing about Legian is the sheer variety of waves. On the far outside, local shortboarders were ripping it up in OH waves, while the second break was about chest high, and the inner breaks about waist high. There was also plenty of perfect whitewater for beginners. Farther south is Kuta Poppies and Halfway, both a bit smaller than Legian but apparently better at low tide.

We spent most of our time surfing waves at Legian, but later ended up near Halfway as the tide dropped. I’m loving this 7′ board, with its agility and much faster turn. The two rights I got were super smooth and fast. The HH wave caught me by surprise. I had paddled to the outside after getting numerous inside waves. Feeling confident, I turned to paddle into a set from the outside and found myself plunging down the face caught in a section that was closing out. Knowing I was in for an severe wipeout, I told myself to stay calm as I went under. I could feel my arms being flayed about underwater by the powerful wave, covered my head for protection until I felt my leash tug and knew my board was in front of me. I came up to see the next wave of the set approaching. I could either paddle towards it and turtle roll or I could get in position and start paddling for it. I chose the latter and boy was I glad. I made the drop and it was so fast, I had to hang onto my rails to slow it down so I could pop up. When I did, I just flew across the wave angled to the right. When my ride ended, I saw Max giving me the thumbs up. He had seen both the first closeout wipeout and the next successful ride and told me it was at least head high. Such an adrenaline rush.

Later, when we got out of the water I noticed my left ear was blocked. I tried to shake the water out but to no avail. Even after dinner, it was completely blocked. When we got back to the bungalow, I googled to see if there were any tips on water/ear blockage and most suggested antiseptic ear drops. The local pharmacy down the street didn’t have any. Max quickly suggested that we contact the hotel nurse before they left at 9pm. The nurse on call suggested calling the doctor to come by the room. The doctor turned out to be a sweet Indonesian lady and she and the nurse did an ear irrigation which flushed out some crazy looking globs of stuff – sand, rocks (?!) and ear wax. Rather gross, but made humorous by the fact that the nurse kept saying “look what came out!” and showing me the stainless dish each time they flushed my ear. I can hear again (phew) and so glad it wasn’t anything serious. I’m also really grateful for their gentle kindness. The people are really what makes Bali special. The local surfers are all friendly, even when I saw several beginner tourists cutting them off on waves. The local instructors are cool too and one even said terima kasih (thank you) to me once when I turned to avoid some German beginners on their foamies.

Such an amazing day of surf: one that I’ll never forget.