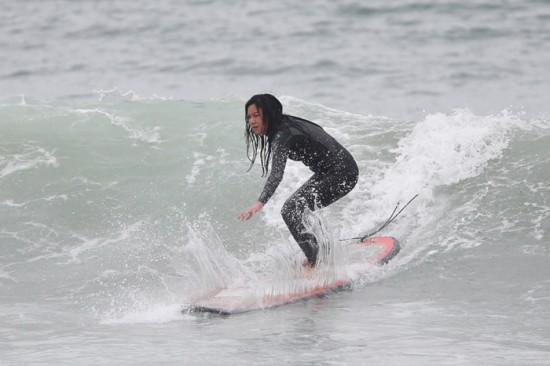 First day surfing Seal Beach with M&M Surf School. We’ve been planning to come and get some instruction from Michael Pless and Michael Jr. after reading Peter Heller’s Kook, and with a break in our work schedule, this week turned out to be the perfect time. Got up this morning at 6:40am feeling pretty rough from not sleeping well last night even though we went to bed early. I’m pretty sure I only got one or two hours of sleep and laid there the rest of the night listening to various noises and trying not to look at the clock. Nonetheless, we rallied and were at the break by 8am, knowing that once we hit the water we would probably be fine. We were right! After suiting up and going over some basics, we split into two groups (regular vs. goofy) and headed out with Michael Jr. on our 10′ boards. It was incredible. Caught more waves than I can count during the 3 hours, including both lefts and rights. Psyched for Max who got his first right. So much fun. Mike Jr. is a hoot. He’s hyper, hilarious, insightful and yells instructions in a loud commanding voice with a fake Southern accent (the instructors accent of choice for this year. Last year it was British ;).

[REGIONAL SUMMARY: SSW groundswell continues with inconsistent but fun size sets this afternoon. Most breaks are in the 2-3’+ range while standouts are up to shoulder high on sets. Winds continue onshore out of the SW to WSW but are fairly light with a touch of surface bump/texture on it.]