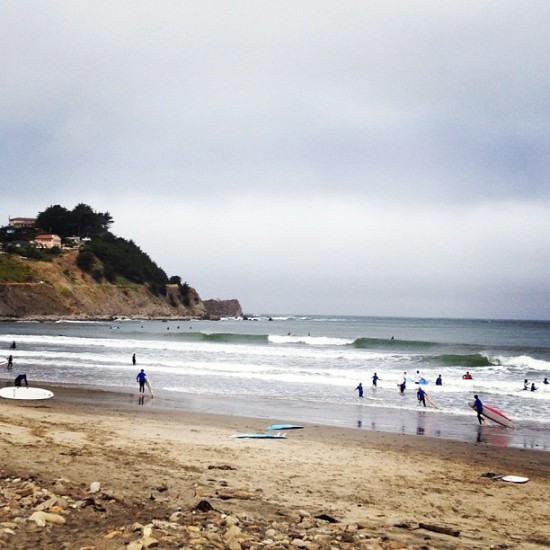 Got up early this morning to surf at LM. The weekend heatwave had subsided and it was back to fog and chilly morning air. Winds were expected to be offshore but it was more westerly when we arrived. The tide was just starting to fill in. We suited up and got some decent reforms near the south end. Max was trying out his Harbour 9′, which he hasn’t surfed since last fall. He was happy to get waves and said the board felt stable. The strong winds started to subside later on and I eyed the waves that started appearing farther south. I was psyched to get one of those good waves where I happened to be in the perfect spot. Popped up and rode a smooth clean right. Yew!

[3-4 ft + waist to shoulder high. This morning’s dawn patrol: Broken up and consistent lines working through. Shape is mostly soft and sectiony with a bit of surface bump/crumble on it. REGIONAL SUMMARY: Primary NW-WNW wind/groundswell mix combines with a small, inconsistent SW southern hemi swell today. Surf for the better spots is in the waist-head high range this morning while top NW and combo spots go a bit overhead on sets.]