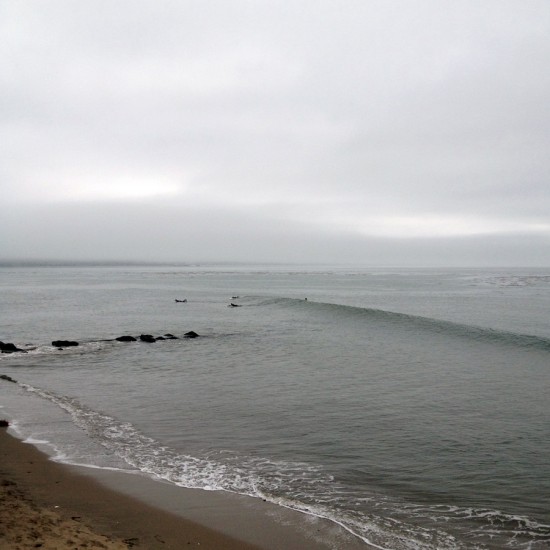 The beach was shrouded in marine layer today after a week of hot, sunny weather, but it was a nice change. Waves were smaller after the WNW swell diminished and a small 1ft SW swell coming in. The tide’s been really high and above 2′ even at low (and rising to over 6′) so we got there as early as we could. There were long lulls and the waves were breaking close to the cliff but I still managed to get some fun, short rides after the initial wacky one. After a long wait, I paddled for one that picked up enough for me to popup but for some reason I lost my balance and did a dive/face-plant off the right of my board. Hahaha, I’ve never done that before. The next few were short and fast rights. I had a good one popping up early and turning right away and riding as far as I could down the line; and another where it felt like I did a nice tail turn. Max got a couple too and we were joined by the guy on the Walden, his friend and later Ryan on his shortboard. After surfing, we did a little jaunt to the west-side for lunch at Saturn, a visit to Arrow surf shop, then drove down W. Cliff to the surf museum and stopped by Steamer and Cowell’s.