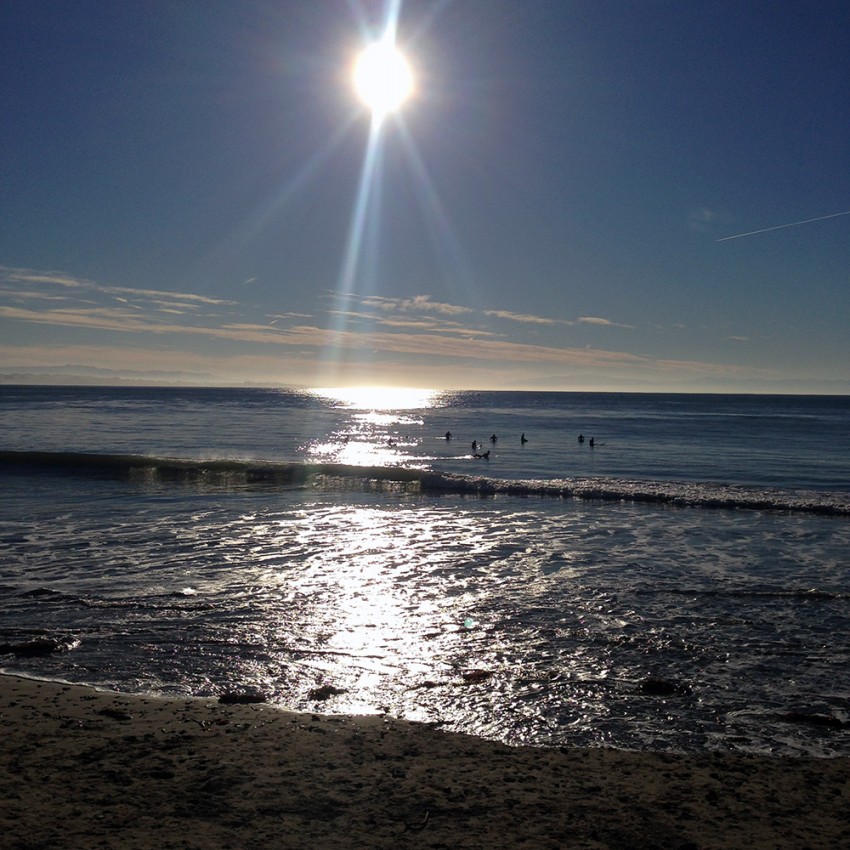 Felt great to get out this morning. It’s been cold (40-50) the past two weeks with winter storms and rain every couple of days over Christmas, making the break at Capitola brown with runoff. Yuck. The storms brought big junky swells with messy South winds. Luckily, we didn’t miss much surf while we were sick for an entire week. The past few days a new WNW swell arrived in SC and we saw some big waves at the point. This morning the tide was rising and just over 3′. When we checked the surf, it seemed pretty slow with the higher tide but as we got ready to paddle out, a big set had just come through with fast HH waves shooting offshore spray. Saw a couple of great rides, including one guy who just almost got barreled. We paddled out over the remains of the set and then waited through the next long lull. There were just a handful of surfers out, commenting that they thought it was going to be more mellow today but turned out to be fast and steep. The waves looked a lot more hollow than usual too. On one set I had to paddle hard to make it back outside over a really steep wave. Max was on the right of me paddling over with another guy and I thought they were going to get it on the head. As I paddled towards the wall of water, it looked like it might close out but then I thought but it’s Capitola, it never closes out. Made it over and dropped down over the back of the wave. It was hard to position today, feeling either too far out or in and possible being caught inside if a bigger set came through. Paddled for one that I thought might pan out but I was just too far on the shoulder. Caught a really short, smaller one near first jetty as we headed in. Yay. Too bad the GoPro didn’t actually record any video for some reason today. Feet were cold today for the first time. 5mm tomorrow. If I had been surfing for a whole week through the swell, I would’ve been more in the zone mentally and physically for today’s type of conditions, but as it was, I knew my limits today with those big steep waves :) Great to be over our colds and get out for the last surf of 2012. Looking forward to more waves in 2013!

#204 / 9am / HP1
[Regional Summary: Mix of old/fading WNW swell and new/building WNW swell. There’s a big high tide filling in this morning so the surf is kind of slow but better breaks still produce inconsistent chest high to slightly overhead sets. Ocean surface is mostly clean. Expect the surf to improve through the afternoon on the outgoing tide.]
3-4ft
2ft at 18s WNW (294°)
2ft at 14s SSW (202°)
1ft at 14s WNW (286°)