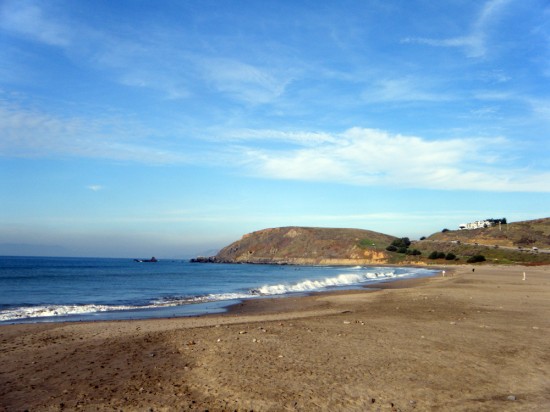 Back in SF and busy getting back into the swing of things. Namely, getting used to the thirty degree drop in weather temp (from Hawaii) and big winter surf conditions in NorCal. It’s been an average of 8-10’+ every day for the last ten days. After a week out of the water, we squeezed in some time this last afternoon to get down to Linda Mar. It was a surprise to see LMwithout big surf and closeout waves andlooking more like summer conditions – atypically calm, mostly flat with a few small sets rolling in but without any breaking waves. Even the Northern end was fairly calm with just a handful of surfers.

I wore a hood and 3mm gloves for the first time and had a chance to try out my new 5mm Hotline booties, which I love. With a water and air temp of about 54 degrees, the extra coverage was excellent and I was toasty. I could probably use 1mm gloves or forgo them completely and still be fine. Despite the lack of waves, we had a good time getting in some paddling exercise, back and forth from South to North. The birds were out – giant California brown pelicans and a flock of seabirds sitting in the water near the Southern end (perhaps, grebes?). Very peaceful.