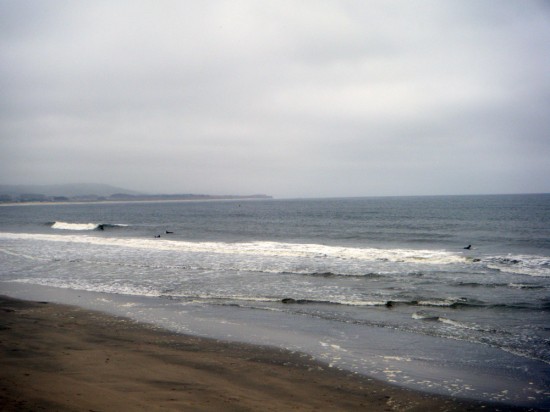 After yesterday’s fun at the Jetty, we were eager to go back today. In between meetings and work, we headed down there in the afternoon, timed for the tide to be rising from low to high. The waves were small today, with swells at 2ft @ 9s from W and 1ft @ 13s from SSW. The breaks right by the Jetty were mellow but closing out. There were a few other surfers out to the south end where we had been the other day. By the time we suited up and headed out, we were the only ones at the break! I had planned to try for some waves farther out this time, but they looked crumbly so I had fun catching reforms again. I’m still waiting for the conditions to be good for a nice right on the shoulder. Patience, grasshopper.

It was windier and the water felt colder today and at times my hands were tingly and a bit numb. Despite the cold and our intention to go out for a quick surf, we were having so much fun, we unknowingly stayed out for an hour and a half. And, did I already mention that we were the ONLY ones out? So awesome.

#68 / 2pm
[2-3 ft Light and variable west-northwest winds with smooth seas. Small short period wind waves from the west. REGIONAL SUMMARY: WNW(270-305) wind/groundswell mix holds and small/fading SSW(190-210) energy, as some new SSW(180-200) swell starts to build in. Fairly clean conditions prevail across the region with most breaks running in the waist-chest high zone. Standouts pull in a few chest/shoulder high+ sets at times. Cibdutuibs are an issue at most breaks with steady WNW winds already making a mess out of conditions.]