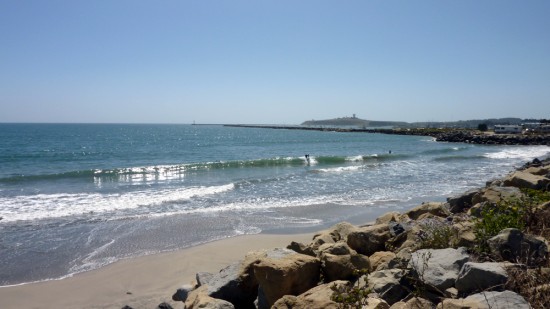 Today was the 14th session we’ve had at the Jetty in the past month and while I’ve gotten some small green waves at the south end, today was the first time I got four waves from the outside near the north end, with a couple of them going right! After watching the sets roll in from the beach, we paddled out to a spot that was left of a few other surfers. I sat for a while watching the sets come in and figuring out my positioning. I waited until I saw the rolling bump of a wave forming and let the first one pass. Then I went for it. I paddled hard angling right in the direction of the wave, popped up and made the drop. Max said he saw me from behind and it looked like I might get wiped out by the wave, but then he saw me pop up, my arms go up as I made the drop and down low again to ride it out. WOO! With the adrenaline pumping, I paddled back out and over the next hour or so, got another three (or four?) waves from the outside, only wiping out once. It was also a landmark day for Max, who also got his first right on his shortboard. As I write this six hours later, I’m still smiling from the stoke. For someone who likes to be in control and “the best” at everything I do, surfing is humbling. There’s no fast track and no short cuts. It’s a spontaneous dance with the ocean, a moment in time that allows us to interact with nature as it occurs. While that may sound clich√©, it’s true. It’s taught me patience, skill, and a unique type of focus. I’m forever grateful for the stoke.

#78 / 3:45pm
[2-3 ft Light and variable west-northwest winds with smooth seas. Small short period wind waves from the west-northwest. 1ft @ 16s from SSW (209). REGIONAL SUMMARY: A crumbly, jumbled mix of mainly sloppy NW windswell and small S/SSW swell is on tap this morning. Surf for better breaks is in the waist-chest-head high zone, with standout exposures pulling in some overhead sets. Winds are steady out of the NW putting a good amount of texture/chop to the surface at most exposed breaks. There are some ride-able corners to be found, they’re just under a decent amount of surface chop.]