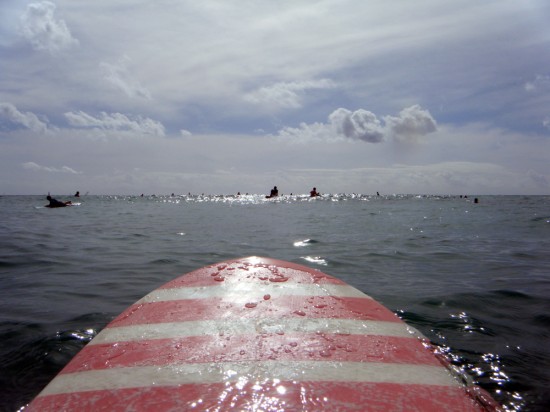 What a difference a day makes. The SSW swell eased and it was pretty flat today along the South shore. We eyed the breaks while having coffee on the beach and decided to eat and head out despite small waves and a fairly strong wind. Queens wasn’t breaking as much, but in the distance we could see people catching some rides at various spots near Canoes. We could tell it was windy and choppy. The water seemed considerably cooler today and I was glad Max had gotten a 1.5m long sleeve like I had. We paddled to the spot that was working yesterday but could tell right away that there wasn’t enough force in the waves and we needed to go a bit farther out. The current kept pushing us farther south so it was a sesh full of angling and paddling to readjust and stay farther north and in position during the long lulls between sets. The outside kept sneaking farther out too ;) and it seemed the set was coming in just another 50 ft away. Energy-wise, I felt great and back in surf shape after three sessions and long paddles to the outside.

#95 / 1pm
[Another cool and crisp morning for southern shorelines today with some small but rideable surf rolling in. Most locations have waves in the ankle to knee high range with bigger sets at spots that favor the westerly wrap.]