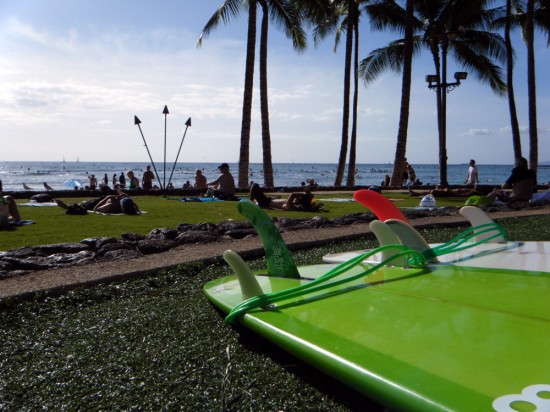 It was a beautiful, warm day today, the first day of full sun, but the waves were lacking. Even as we did our morning survey of the conditions, we could see there were only a few people at Queens and some crowds at Canoes but mostly beginner floaty classes. Since it was our last day on the island, we paddled out anyway just to be in the warm water and get a nice workout. But there really weren’t any waves to be had. We paddled to the farthest outside break and commented on how there wasn’t really an outside today. The set would come in eventually but without any force in the swell, they would just flatten out. Made me even more thankful for that awesome birthday surf two days ago. I feel refreshed after surfing four days in a row in warm waters and soaking in the beauty and aloha of the island. A hui hou, Oahu!

#96 / 1pm
[Tiny surf prevails for southern shorelines today and you will be hard pressed to find a meaningful wave. Most locations have waves in the ankle to shin high range with some slightly larger sets at select locations. Mostly sunny. A 20 percent chance of showers in the afternoon. Highs 70 to 78. Light winds becoming southwest up to 10 mph in the afternoon.]