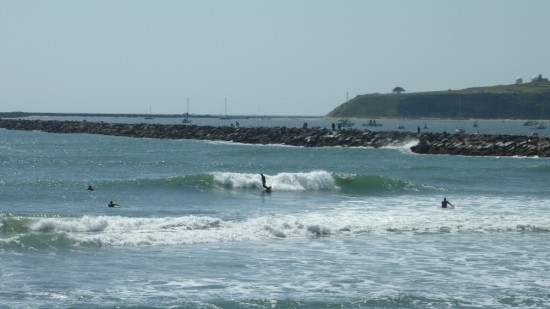 Headed out today for what was going to be a mellow session. Watched for a while to decide where to paddle out but waves were shifty. We opted for just north of the stairs. Difficult to get out with lots of chop. I keep paddling to the outside to avoid the next incoming set and saw Max closer in catching one in. Decided it was too choppy and deep in that section and planned to turn around and head in, but just then, a fairly large wave came and I went for it, made the drop, felt the wave closing out and uncharacteristically lost my balance and bailed (I never bail!). In a split second, I lost track of my board underwater, came up and and got cut just above my left eye near my eyebrow from the leash bounceback. Immediately I saw blood spurting onto my board as I walked to the beach. Max saw me and started paddling in but I knew I needed ice fast. Got to the jeep, washed off the cut, put ice on it. We drove home but then decided I should probably go to the emergency room at St. Francis Medical. Glad I did because it took 9 stitches. Out of the water for a while and just hoping it heals quickly before the trip in May!