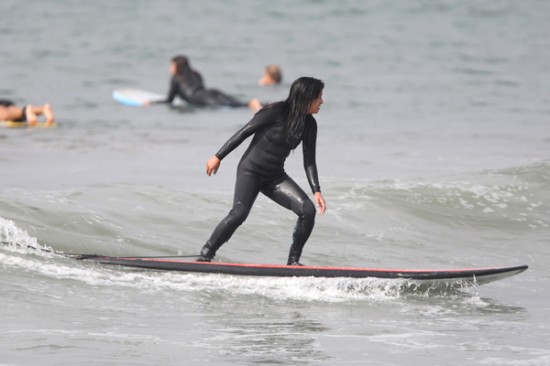 It was our last session in Seal Beach. We spent last night reminiscing about how great it’s been, how much we’ve learned and laughing remembering all the fun moments. I could definitely stay for another month and be perfectly satisfied to surf every morning and make quick progress under Mike Jr.’s guidance. I’m having so much fun and learning at an accelerated pace. Getting feedback from him every time after a wave is invaluable, motivating, exciting. We plan to come back as often as possible for more.

Today’s session was a smaller group of return surfers, including Keith, Christine and Vince (from Newport Beach), and a few others. As we walked down the beach Mike mentioned how the spot we were lined up to yesterday was going to be at least 5 feet. We moved farther north a bit to start. After about an hour, the waves were bigger than that and every so often someone yelled “outside!” and we all paddled madly to make it over the next incoming wave. I was having some issues going left early on but finally nailed several. Mike is right (no surprise there!). When I’m relaxing and not thinking about it too much, it just works and I get the wave. One of the high points of the day was finally understanding paddling into the left while watching the line form while paddling, picking up speed, making the drop, staring down the line as you rush along. I’ve gotten more of those than I ever have and it’s starting to sink in as a mental/physical memory. Today was also notable for the hard paddle back out. It was coming in sets of eight, and several of us mentioned being tired from getting back out. 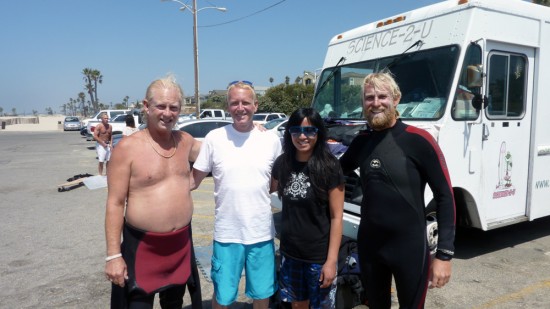 We wrapped up the session around 11am and headed back to the parking lot for goodbyes and hugs. I love these guys. I would recommend M&M to anyone who wants to learn to surf or to improve their surfing. Michael Sr. and Jr. are the warmest people you’ll ever meet and possess so much combined surf knowledge. Everyone else that’s there is also mellow and part of the larger M&M family. You really do feel that here. It’s amazing to watch Mike in the water instructing each surfer on what to do, when to go, what they should correct, yelling encouragement, busting on people for mistakes, and generally being entertaining, all in real-time while sets of waves roll in. Take a lesson with M&M. Make the trip to Seal Beach. It’s a mellow, friendly beach town with a family-vibe and none of the infamous traffic of SoCal. I can’t wait to return.