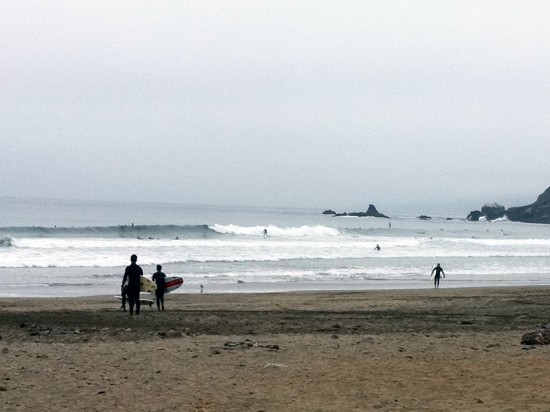 This past week’s been buzzing in anticipation of the south swell’s arrival. It’s the same swell that arrived in Oahu on the last day of our trip, and also created giant waves at Teahupoo for the Billabong Pro event. We checked out the Jetty (and LM) a few times this week, but it was big and shifty with mixed peaks that crashed right into each other. We watched surfers attempt to get in position, or get back to the outside, or get a ride amidst the sizable slosh to no avail. Today, we were eager to get some waves since Max and I hadn’t surfed for two weeks since Oahu. Despite the the fading SSW swell, LM turned out to be great this morning. Glassy, few closeouts, nice shoulders and clean lines from north to south. It was a welcome change from the other day when all I could see out there were HH lines of closeouts with a short occasional peak. After the amazing instruction from Mike at Seal Beach, I’m more in tune with what conditions I’m looking for and being more selective. Both Max and I got several sweet rides on our new longboards, the first time they’ve been in the NorCal part of the Pacific. It was the perfect head-clearing, body-buzzing kind of surf session I needed. Thank you ocean. 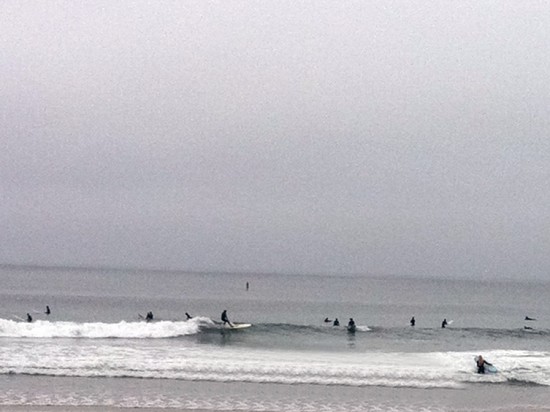 [Southern Hemi energy passes by. Expect broken-up peaks out of the NW-WNW topping out around waist/chest high. REGIONAL SUMMARY: SSW(200-210) Southern Hemi energy begins to slowly ease today as NW-WNW wind/groundswell mixes in. Expect shoulder-overhead+ sets with some decent peaks at the better combo breaks. Spots without a view of the SSW go smaller. Light westerly wind early. The tide is still fairly full, so a lot of spots look a bit soft/slow overall.]