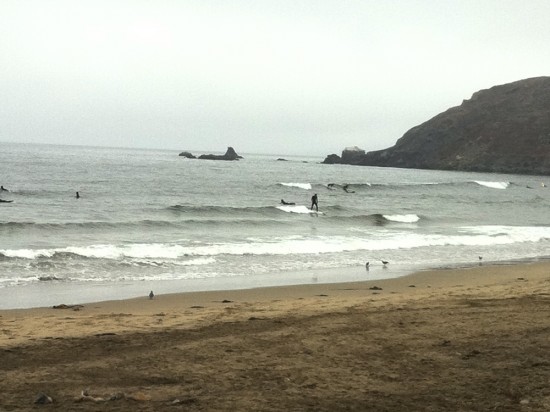 Max and I finally had time for a morning surf so we headed down to Pacifica as the tide was rising. We had originally wanted to check out the Jetty since it was supposed to be getting some SSW swell, but after getting stuck on 280 because of an accident for 30 minutes, we opted for Linda Mar. It was small, but mellow and without the usual crowds and as we suited up, I saw a woman get a sweet long left in front of the pumphouse. My best wave was another smooth left like last time. At one point, as we waited for the set to roll in, Max spotted a jellyfish in the water. It’s the first time I’ve seen one at Linda Mar.

Before we headed out, we met Rick and Izzy, regulars that we’ve seen in the parking lot and members of the Pedro Point Surf Club. Rick was parked next to us and had spotted my Koa board and as we chatted, I realized he was the one with the Koa Board Sports sticker on his van from the other day. We talked about longboards and Hawaii (they go on surfaris to Waikiki, hence their fondness for Koa). Izzie was super-friendly and had already surfed. He loved the nose rocker on my board and joked that I could probably have a tea party on the nose. Turns out Rick is a graphic designer and used to work for Lockheed but is now retired. He does all the posters for the Pedro Point Surf Club, including the poster for next Saturday’s Big Chill Out XXI Longboard Surf Classic that you see posted at LM. Fun sesh and friendly surfers = good times.

[REGIONAL SUMMARY: SW (205-220) groundswell tops out today while mixing with minimal NW swell energy. Better exposed spots are in the waist-chest high range, and standout breaks pull in a few shoulder high+ sets on occasion. Onshore flow is fairly light out of the WSW with a bit of surface texture/crumble to most areas.]