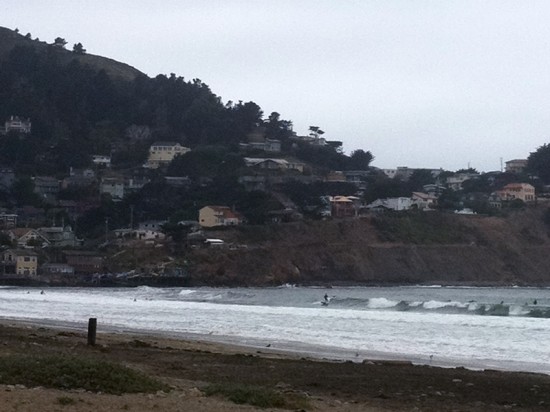 The forecast was actually right today. “Winds are onshore and conditions are pretty junky overall.” It was colder in Pacifica today than two days ago. We could feel the air temperature drop as we rounded the corner from 280 to Hwy 1 towards the coast. The wind was blowing at around 11 kts with gray overcast skies and surfers changing out of wetsuits in the parking lot looked cold. Ah yes, I had almost forgotten the usual Pacifica conditions since they’ve been blissfully absent the last several sessions.

We headed out to join a small group of surfers at the South end, although later in retrospect, perhaps we should have gone in front of the pumphouse where the old Pedro Point guy with the cocker spaniel had told his buddy to go. But after observing a couple of sets, it seemed like one of those days where the middle section was choppy, sloppy and closing out. The only surfer I saw getting waves was on a tiny bright red fish, zipping left on short sections with a mellow stance and kicking out. He had great style.

Anyway, tried for several waves for an hour on the outside of the South end, shifted closer to what I thought was the peak but whenever I paddled to the peak and thought the wave would pick up – nothing, the wave just mushed out. None of the other surfers I’d seen getting rides earlier were getting any either. Everyone moved towards the inside but nada. The peaks were mush as the tide came in.