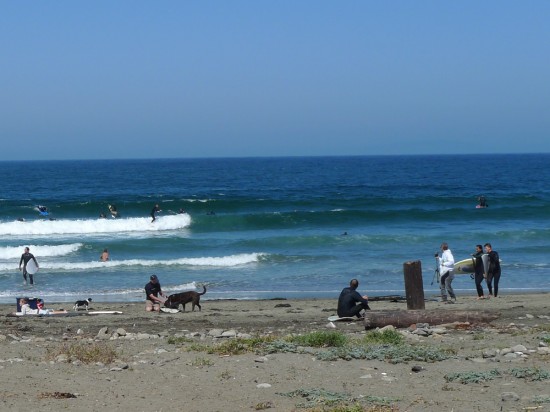 Looks like our late summer has arrived. Temps this upcoming week will be like today, in the upper 70s (in SF and Pacifica) and full sun even before the afternoon. Yay! We were bummed to miss Cynthia‘s invite to join the Coastside surf posse at the Jetty this morning (had to do some work last night) but we still wanted to get a surf in so we headed down the coast. LM was packed as usual on a sunny Sunday afternoon with surfers all up and down from North to South, and for a second, we debated whether it was worth it given the crowds, but conditions looked pretty good with low wind and we spotted a good left and some workable corners. I’m glad we paddled out as the waves looked even better once in the lineup and it seemed to be less crowded than before. I chatted with two teenage guys who were saying how cold they were. I was the opposite and had to dump water on my head to cool down! One of them commented that “the waves are a little better there (on the north end) but man, they’re so serious over there! I like it better over here.” I laughed in agreement. I got a nice left and two more solid rides. The waves were forming nice lines and few closeouts. As if to match the sunshine, Max got his stoke back today! Smiles all around.