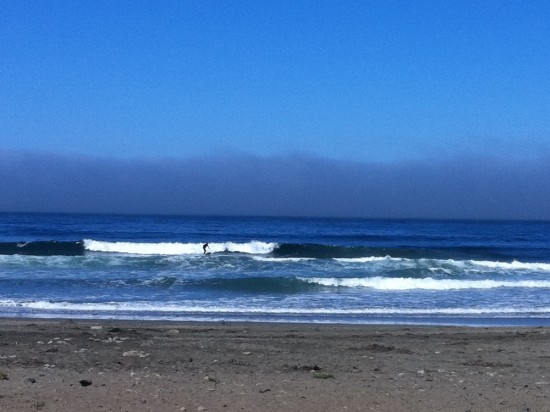 On Saturday, the Pedro Point guys had mentioned Monday was the day to call in sick for work, so we headed down to check it out this morning after scoping the conditions on Pacific Waverider. It was a sunny, beautifully warm day but the windswell was doing its LM thing, and it was closing out from TB to the pumphouse. The north end looked pretty blown out despite having some size. We saw a possible left closer to the south and gave it a go. It was jacking up quite a bit on the paddle to the outside so I took a nice break once I got out to just hang for a bit and see what was happening. One guy on a longboard seemed to be catching some short sections in between closeouts and later when Max talked to him in the lineup he said he had a knack for spotting windswell waves and had caught 68 (?!) waves last time during similar conditions. I didn’t have the same luck or skill today. I paddled for one in particular that looked like it would shape up and form a peak, but as I popped up, I could feel the back of my board push up from the closeout and I went for a nice tumble underwater counting a couple of somersaults forward and three backward before I came up. I shifted farther South to a spot next to a girl on a shortboard, but we both tried for waves but the peak would mush out. Determined to get something, I paddled over to where Max was a bit closer in. I managed to eek out a couple of seconds on one wave before we had to call it a day.

Afterwards, in the parking lot, we met Joe, a retiree who used to be a lifeguard in SF and worked for the city, and now lives “over the hill” and surfs everyday on his 10′ longboard “anywhere from OB to SC.” Seems our longboards are definite parking lot conversation starters. Everyone wants to guess the dimensions. He was right on, guessing mine was 23″ wide. “It’s a pleasure meeting you,” he said to us, “see you soon. I’ll be here every day. I’m not going anywhere.”

As we ate some food, the fog started to roll in from the ocean, the temperature dropped a bit with the wind, and quickly, the horizon was masked in gray and the surfers out in the water became hazy little specks. 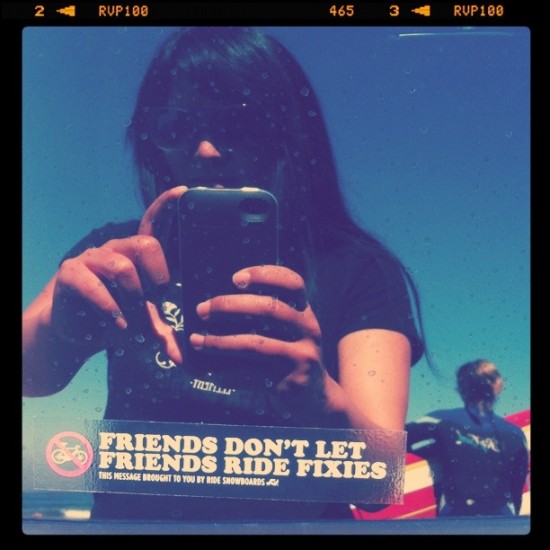 Sticker on a car window at the beach that wouldn't be popular in SF :)

[REGIONAL SUMMARY: We have got a slowly building NW swell in the water this afternoon with some small scale SSW southern hemi energy. Patchy fog is coming and going along the coast with light Westerly winds putting a bit of surface crumble on mainly knee-waist-chest zone surf. Standout NW spots are up to shoulder high on the larger waves.]