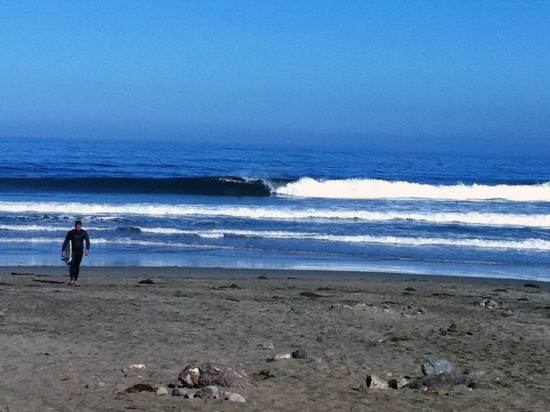 Middle closeout section that we avoided. Didn't get a good shot of the south end. Too busy surfing :)

Let’s just get to the point today quickly – STOKED! It was by far my best and favorite sesh at LM to date. I had already lowered my expectations after yesterday’s closeout sale and when we pulled up to the lot, I kept them low since the entire middle was closing out again. At least it was beautiful warm weather, clear and sunny and without wind. We saw Izzy by the wall and chatted with him for awhile and met another PPSC member, Denise, who I’ve seen at LM a few times. They were waiting for Rick and someone else to show up so we suited up and headed for the south end.

We joined the other ten or so surfers grouped near the peak and said hello. After one paddle-for-a-wave that mushed out and a subsequent wipeout from getting caught on the inside, things suddenly got better. Izzy joined the lineup soon after and we ended up sharing two awesome party waves – smooth, powerful lefts that just kept going. He was fun to surf with (and gave me two good tips: I need to a bit farther forward on my 10′ board when I’m paddling back to the outside; on steeper waves, paddle/angle in the direction it’s going to break rather than paddling in straight and turning later). The first time we paddled towards the same peak and I saw him to my right. He yelled, “KEEP GOING! KEEP GOING! STAY ON!” and we both turned left. Another time, as I turned my board to paddle for the approaching wave, he yelled, “this one, it’s yours!” I caught it and rode the longest left I’ve ever had a LM. Caught four great lefts before we had to head in.

Everyone in the parking lot that had been at the south end was stoked. You could tell by their smiles. The woman parked next to us (white pickup, little dogs) turned out to be the one wearing the hat out in the water. I told her I’d seen her awesome left when I was getting out. She was psyched. Max and I caught up with Izzy again in the lot and laughed about the great rides and conditions today. Such a fun surf!

[REGIONAL SUMMARY: A combo of peaking NW (295-325) swell-mix and small South (180-190) swell has most well exposed spots in the 2-4′ range while standout spots see occasional shoulder to head high sets. It’s sunny, warm, and winds are just very light onshore so conditions are mostly clean still. The tide is a bit high and shape is a little soft, but overall it’s looking like a nice afternoon to get some waves.]