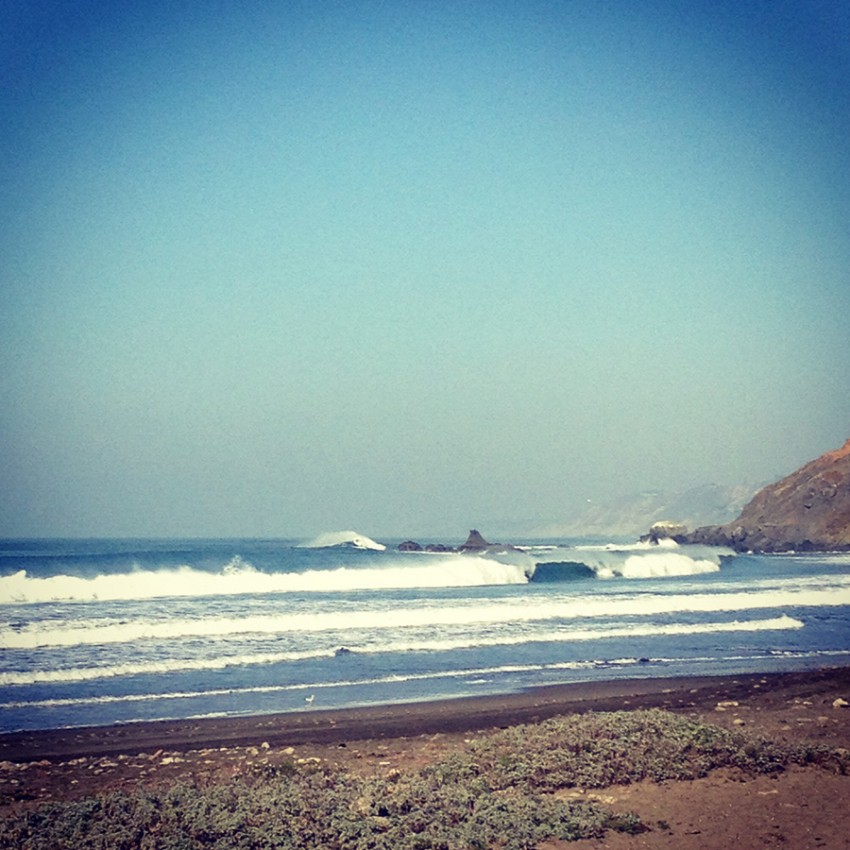 From the cam, it looked like sunny Lake Linda Mar, but when we arrived, a large set was rolling through from north to south, with light offshore winds shooting spray. We ran into Greg and chatted with him for a few and watched the waves. We all agreed the south end was the best. I paddled out in between sets and sat with only two other surfers on the outside. The first guy nailed a nice right on the first wave of the set, while the other guy wiped out on the second wave. On the inside, two shortboarders wiped out as well. Tide was dropping and the waves were breaking right into shallow water. You either had to be pretty far outside or immediately on the inside. I observed for a while, enjoying the solitude and watching the swell lines roll in from north to south. Occasionally I had to paddle over some steep ones. After sitting for a bit, I paddled around for better position. I opted for medium-sized waves and caught two short fun rides. Max had his Harbour 9′ board today instead of his shortboard. He was able to do a pushup the other night without any shoulder issues (after his PT suggested trying it) and today he managed to popup and get to his feet on several whitewater reforms. So happy that he’s getting better after two months!

[3-5 ft waist to head high occ. 6 ft. FAIR CONDITIONS. REGIONAL SUMMARY: Long period new WNW(285-310) groundswell builds in through the day today. Most breaks are starting off in the chest-shoulder-head high+ range, with top exposures that can focus the longer period energy pulling in some 2-3′ overhead sets. The tide is making for some sluggish, warbly corners at a lot of breaks, but there are still some good corners mixing in. Conditions are nice and clean thanks to light ENE-NE winds.]