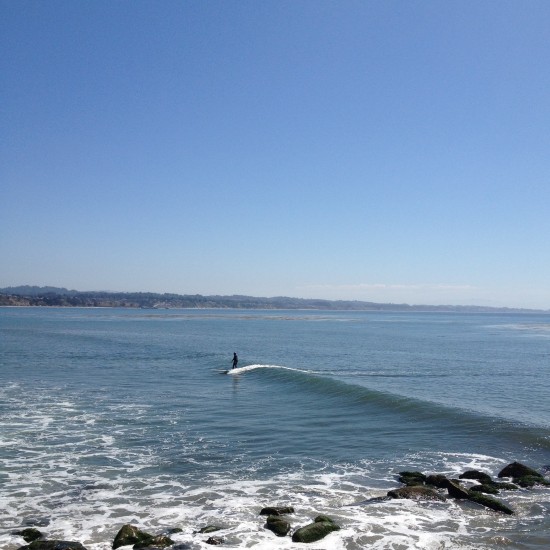 Small wave when we first arrived.

Memorable sesh today. Regular sets rolling in on a rising tide sometimes with some size and others that were small-medium. The brothers were out in the water again. Brian, the older one riding with style, all low on his board and Nathan, the smaller one, standing up on his board to alert us of the biggest wave of the set. Max named him wavespotter :) The other surfer was wearing a sunhat and on a big 10’6″ that he “offered to store” for his bodyboarding friend who kept hitting his head on it in his garage. Capitola surfers are full of good cheer. We chatted and took turns on waves. The one he offered up to me, “it’s all yours!” turned out to be one of my best and longest. Caught it over by the rocks and rode it right past the boulders. I wanted to ride it as long as possible since the last wave I had kicked out too early. This one curved and shaped in front of me as I did a turn down the wave and saw the opportunity to pull up into the line with my right hand touching the wave the whole ride… it was a landmark for me of sorts. Perhaps the first conscious time I’ve been reacting to the wave as it unfolds before me. Another highlight was catching three waves in a set. Got the first one, rode it down the line, paddled back to the lineup, turned and caught another. Repeat. So stoked. Could barely breathe after the third but it was satisfying to push myself physically and mentally. I think I’ve said this the past few posts, but today was one of Max’s best days. He got a big drop and turn, a super long ride to the right, and caught all the waves he went for. His stoke was palpable. We love surfing here. 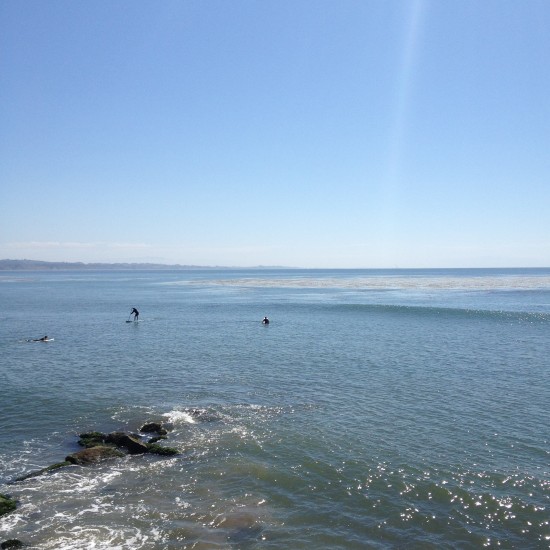 #178 / 12pm
[REGIONAL SUMMARY: This morning there’s a small S-SSW groundswell mix with knee-waist+ sets at top breaks on the West side, while other areas are weaker. Conditions are mostly clean early with light/variable winds.]
2ft @ 13s from SSW (197)