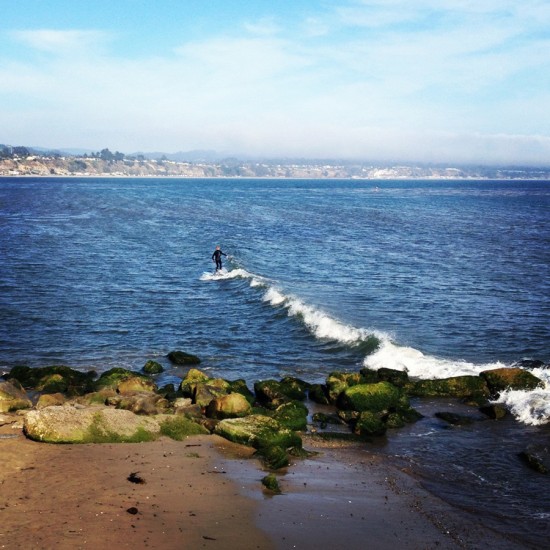 Great to see some swell today after several days of flat. First time experiencing the break with 8mph SW winds, which created lots of surface texture and keep pushing us towards first jetty. First time even thinking about the wind since moving here from SF. Wind was a constant there – every day at 5pm and in Pacifica (dreaded NW winds). So it was funny to have gotten so used to glassy conditions here that a little chop was noticeable. Lots of paddling today to stay anywhere near position. Still, I was super psyched to get a few fun rights, with some speed and thrill. The first one was the best. Had only been sitting in the lineup for a few minutes after paddling out, said hi to the older woman surfer, saw the wave approaching and paddled into position and caught a long one past the boulders. Guy on a wavestorm came out shortly after and he kept getting inside waves. Just moments before they broke, he would catch it and try to run to the nose. Awesome.