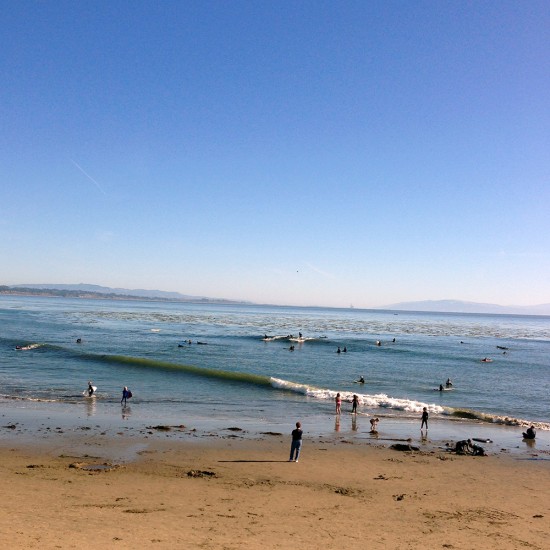 Plan for the day was to surf and then go see Chasing Mavericks. Arrived near low tide and it looked good. Smaller than yesterday but still steady sets. Capitola was packed with surfers and families enjoying summer-like weather at the beach the day after Thanksgiving. We paddled over to the main peak, lined up outside of the 2nd jetty and Max caught a wave right away, zipping past other surfers in the water and riding right. I got two awesome waves, weaving my way through the outside lineup, turning past the inside crew, and swooshing right for a while, bending down to touch the wave at the end. We were on the clock and only surfed for 40 minutes. It felt fast! We dropped the boards off at home and headed to S. River St to see the movie. Loved the film, especially all the footage from places and breaks we know here in SC, HMB and Pacifica. Definitely the best hollywood surf movie I’ve seen based on a true story. Also honored to live in Santa Cruz – to see the film at the riverfront theater, then drive by Pearson Arrow on the way home to Capitola. Inspired and proud to be a surfer! #livelikejay