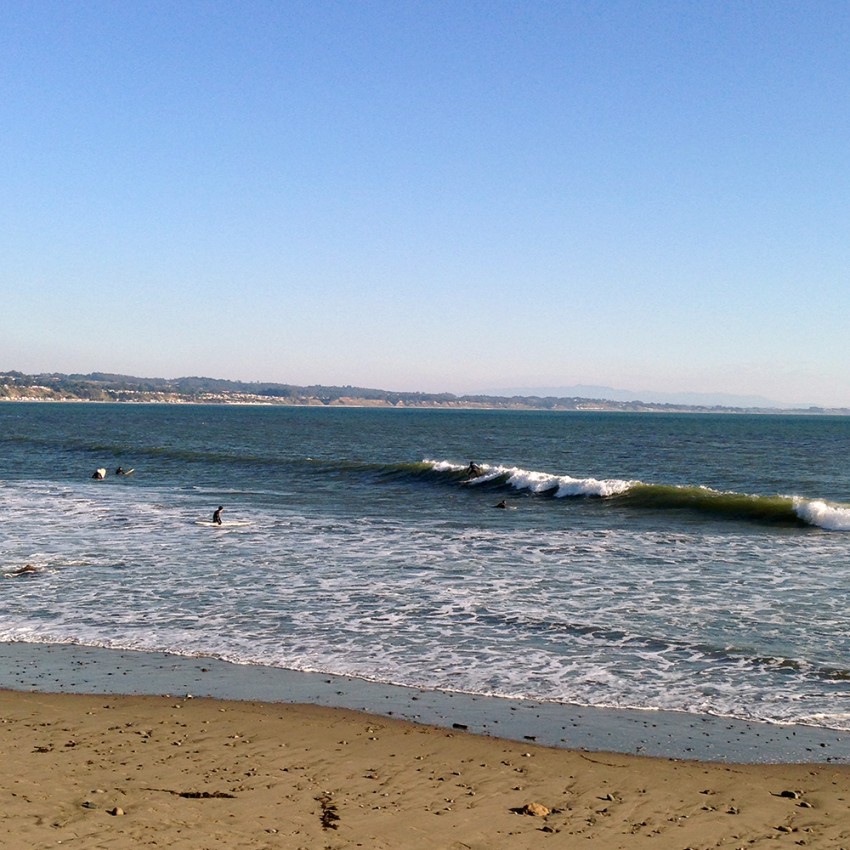 First surf of the year turned out to be awesome! We slept in, missing the morning low tide but figured things would pick up again as it dropped this afternoon. As expected for a holiday, the beach was packed and so was the break, especially since decent shoulder to head high sets were rolling through. Some wind at the beach and texture on the water. We suited up and headed out after helping a father and son parked in front of us with a loose fin. The water was chilly on my hands but my feet were fine again in my 5mm booties. We sat on the outside for a few minutes and then Max took off on his first wave, peeling right into the distance. My waves today felt so much faster than past waves even with the same size. I leaned on my toes and tried setting my inside rail on a right. That ride was memorable – steep and fast and the wall of water was so close next to me. Then suddenly another surfer was approaching from the right. I couldn’t turn left or straighten out because another surfer was standing on the inside with his board right in front of my line. In a split second, the board of the surfer on the right went flying right past my knees. Luckily, nothing collided. Just one of those things you have to watch for on crowded holidays. Another wave seemed steep as I angled right. The nose of my board never touched the face as I made the drop leaning way back to balance. Felt so fast. Must have been right in the pocket close to the curl. Rode that one as far as I could ending it near two boys body boarding on the inside. “That looked fun! Was that fun?” asked one of them. “YES, it was so much fun!” I replied. Later, I paddled for a wave and “body boarded” it down the face to get around a surfer on the inside before I popped up. Wacky! Max got some great rides and also had some near run-ins with newer surfers out for the holiday. No worries, I’m so glad we went out in spite of crowds. Today’s waves were fast fast fast and steep. The good waves give you incredible stoke and the tough ones or wipeouts keep you humble :)