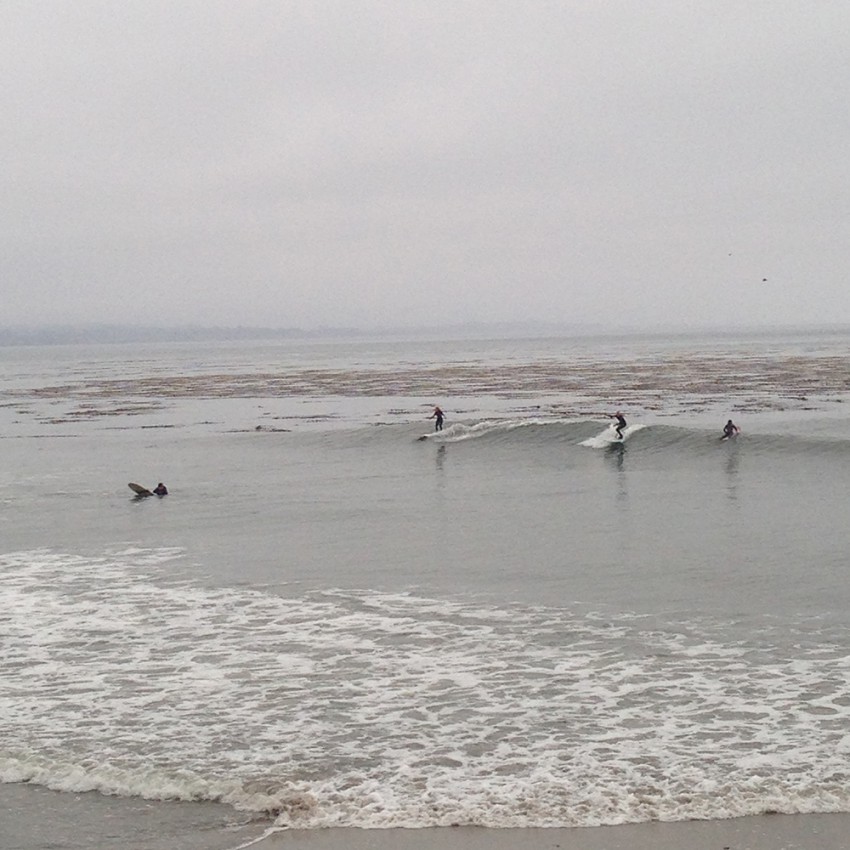 Reached a new milestone in our surf life! Got up in the dark at 4:30am and made it to Capitola for dawn patrol. Plenty of free parking, no beach crowds and only a handful of surfers in the lineup. Glassy, 2′ and rising with a lovely 14s SSW groundswell. There were some lulls, but mostly, just perfect waves rolling in from the outside. I lost count after catching 7 waves: some were long, fast, cruisey rights; others were small, slow motion bumps that curved over towards 2nd jetty and had to have just enough paddling power to meet the peak and catch it. The first wave came within ten minutes or so and as always, I was already stoked after the looong perfect right all the way to the cove. One of my favorites was a small one that I didn’t think I would get and had to lean hard on my front foot to make it, but then the wave started to pick up and I turned down the face, back up, back down, back up, around to another section near the cove and all the way past the second log. That’s the thing with these perfect waves. There’s enough time to think and react and really see what the wave is doing. Another fun ride was one of the few steeper set waves that came through as everyone was pushed closer in. As I paddled to meet the peak and catch it, two surfers that were paddling back out hooted awesome! and I knew I had it, popped up and turned hard right as fast as I could. Surfed as long as we wanted with no rush for time. Finally felt like a full surf sesh with a friendly crowd sharing waves (red hair woman Melinda and her friend on the Pearson, Alex w/ the beard and brother Eric, friend with the baseball hat). A couple of hours later, we had our fill of waves and the 3’+ tide was slowing things down. Left the beach full of stoke and aloha and got post-surf Verve and Mexican food for breakfast. Dawn patrol rocks :)