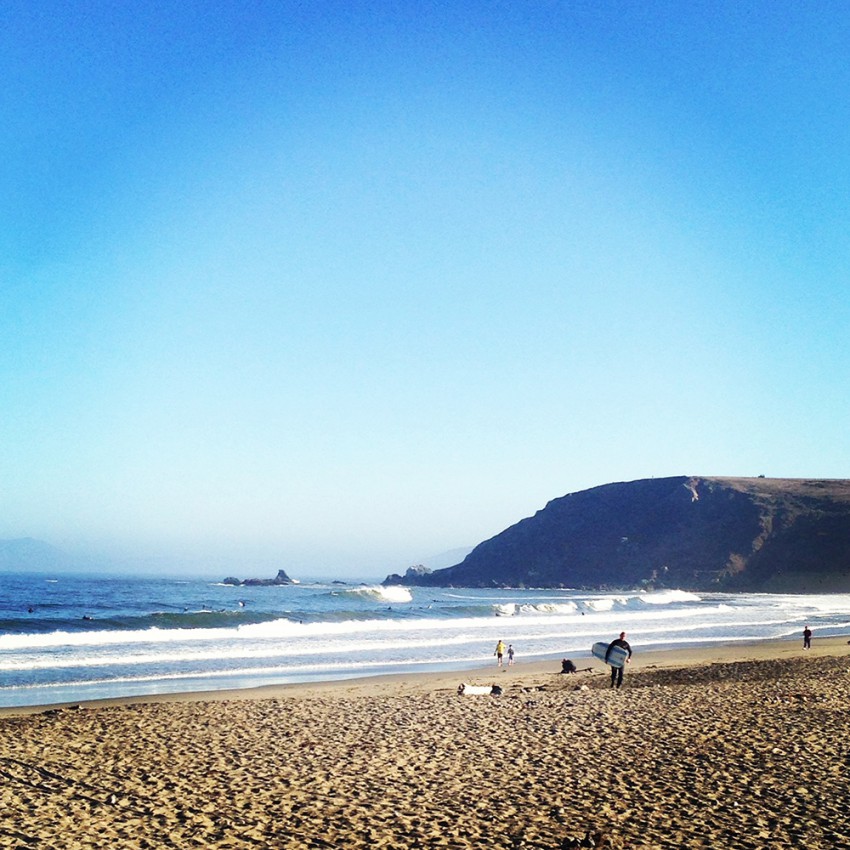 Got up early at seven and got down to the beach. NW swell was arriving with 4-5′ size but not good shape. Waves were big on the north end and the middle was mostly closeouts. South end looked the best. Already the lot was full and it was mostly single guy surfers with shortboards heading out. Debated our weekend plans for a bit and then decided to surf LM and head down to Capitola afterwards for one night to catch Sunday morning 2′ rising tide. Ate and suited up and headed to the south end. An older female surfer on a beautiful gray longboard with orange/red/yellow nose and tail was getting the best rides, long lefts that weren’t always the biggest ones of the set but she had a smooth style and was doing the paddle-left-go-right takeoff which I love. I spent the better part of the first 30 mins paddling for waves that didn’t break, being too far out or too far in for waves that shifted the whole time. The crowd was growing. Finally Max got a wave and that made me stoked. I relaxed and waited for the right wave that had the best shape. One came and I got a good, clean right, shuffled up to maintain speed, swooped around a bit near the end. Tried for many that didn’t pan out and it was getting super-crowded as it tends to do on a sunny, upper 70s Saturday. A few times I’d turn to paddle and see four guys on the inside in my line. But there were those few gems. A steep takeoff, a good popup and turn simultaneously and the sweet one where I went right, then turned left – the one Max told me he later saw from out in the lineup. I also had a spectacular wipeout on a wave where I was too deep and took a nice tumble underwater, board shooting up, the whole works. Got pushed to the inside. Debated going in, but then I thought, Damn you, Linda Mar! I’m not going in on a wipeout. Better get another one :) Made it back out through a set, looked for a spot in the crowded lineup of French and German tourists. Looked for one of the inside ones that Bill had been catching for a white. Spotted one and caught it in to the beach unobstructed. It was the first sesh out with the new 8.5″ Revolver fin from Harbour which arrived yesterday in the mail. In spite of wacky wave conditions, I could tell this fin was awesome. Will probably adjust it a 1/4 to see what happens as the Harbour site suggests.