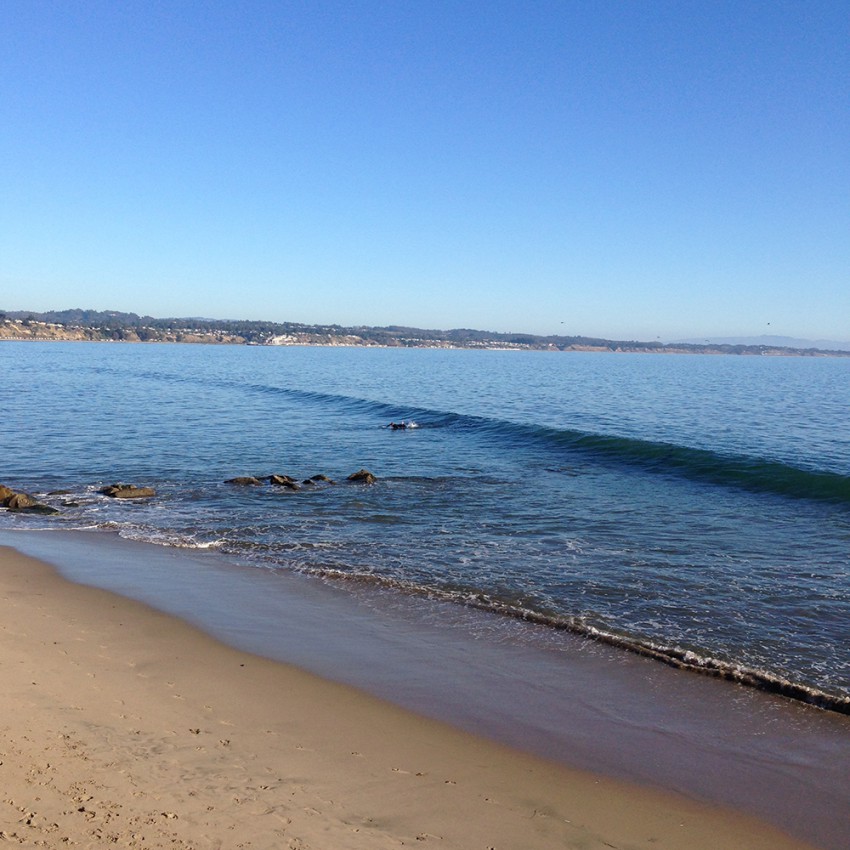 Ahh, reached the December milestone – the start of three weeks off work. Headed to Capitola for the next four days. Feels like forever since we’ve been. Waited for tide to drop this afternoon and knew it would be small <1 conditions but couldn't wait to try out my new 6'4" Stoker V Machine. Planned to paddle out even if it was flat. Some small waves breaking close to the beach at 2nd jetty. About five surfers out - a Dad with his little girl on his board and three teenage girls on longboards. Later the guy on the longboard from my last sesh here in Capitola was out. The 6'4" Stoker felt much more like a shortboard than Max's 6'8" which I tried last time. Not as small as the Motorboat but it took being right at the peak to catch the wave. Smaller the board and smaller the volume, the less leeway when catching a wave. Max got some short rides on his 6'8" while I paddled for lots but was too far out, too far over or too on the shoulder. Midway through the sesh, a rare outside wave broke and I got a fun standup ride off the reform. Woo! Once up, I can totally feel the speed and agility of this board, but the hard part is actually catching the wave ;) Did get one where I looked over my left shoulder, saw the wave breaking right at me with spray shooting up and the sun shining behind it - my favorite view - caught it and stood up briefly. Tried Max's 6'8" again at the end of the sesh, and yes, it was sooo much easier to paddle and ride. Got two good ones on it and felt the speed. Almost turned right on the second one but ran out of wave before the shallows. Beautiful day with sun. Hands were cold and toes freezing at the end. But so stoked to be back in the ocean. #289 / 3:18pm / 2′ dropping / 6'4" Fowler Stoker V Machine and Max’s 6’8″ Fowler Stoker V Machine [Santa Cruz Afternoon Regional Update: Shape is pretty soft/slow at report time as we come off of a 4.6' HIGH tide that topped out around noon. A mix of small NW windswell and modest SSW swell prevails with waist high surf at the exposed breaks. Top spots see occasional + sets. New, long-period WNW swell begins to show late with some larger waves possible. SSE wind now.] 1-2ft 1ft at 14s SSW (196°) 0ft at 24s WNW (284°) 0ft at 16s WNW (295°)