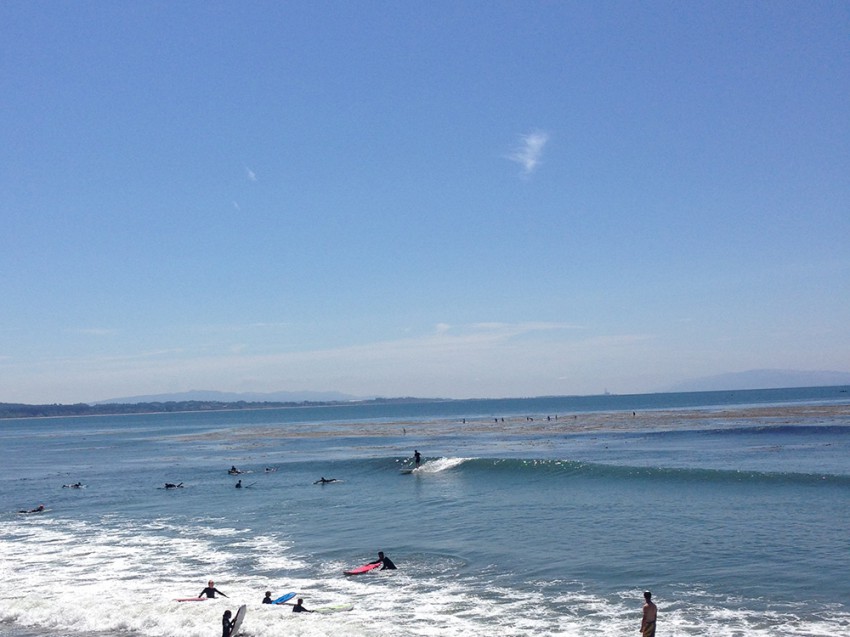 Felt good to be back in Capitola. It’s been too long. Haven’t been since March! We found parking pretty easily and forgot how hot it can be when the sun’s out here. SF’s been gloomy and overcast for the past week since we got back from Hawaii. Typical crowded Sunday lineup but it looked like some sets were coming through and some nice lines. Jumped on my Revolver to paddle out and it sure felt different after the 9′ Takayama log. The Revolver felt so small! My wetsuit and booties felt so tight. Felt slow after being out of the water again for 5 days. Decided to hang on the outside, mostly lined up to 2nd jetty and see how it went. Let the first set roll through while three or four longboarders on the outside went for those. Nice waves. Realized it was one of those days with a lot of current pushing us south and you had to keep paddling to stay remotely in position. I wanted those rights from outside 2nd jetty, with a line through the inside surfers. The first wave was slo-mo and mellow. The next wave was longer and steeper on takeoff. Short ride but ah, yes, coming back to me now. Getting used the board again. Forgot about the wetsuit and booties. Paddling back out feeling the stoke. Kept getting sweet ones lined up to the left of everyone else. Lulls weren’t too long. Enough power to cruise along. Some were faster and steeper than expected. Watching the line curve around, even smaller ones had enough power to rise up, make a drop, swoosh right. So fun. Got a few steep ones. The one at the end was a fast drop, angled right, pulled up with a high line and zipped right all the way down to the cove… past all the inside people who were watching. Longest ride of the day. Yew. Paddled back out around the left and over again to the spot lined up outside 2nd jetty. An instructor was pushing off a mom, son and daughter on the inside right of me. He was chill and I always just went to the left of their position for a longer ride. Max was hanging out more in the middle and I was trying to get him to paddle over way far to where I was. At the end, he got a good one on his WanderInn from there too. Sunday fun day. Great to be back in the water and get some rights! 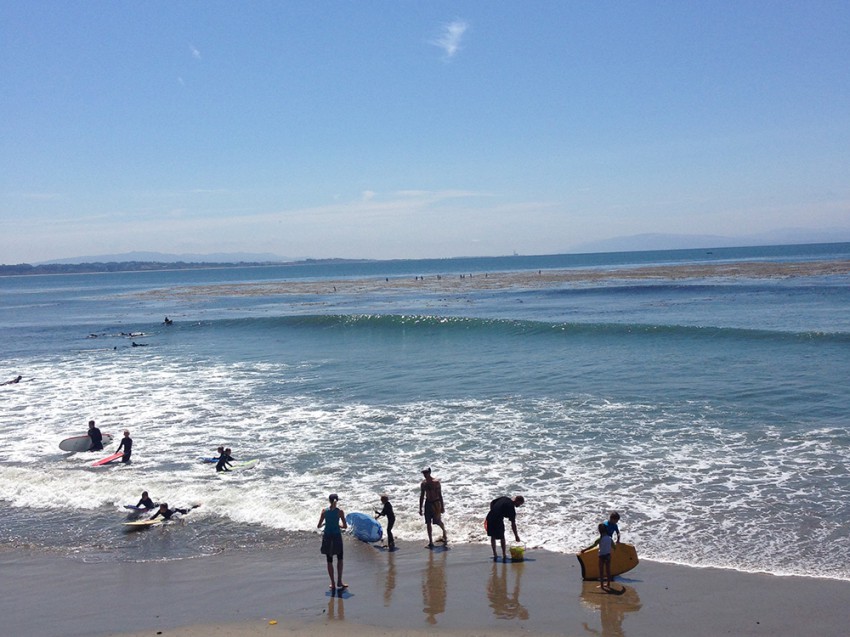 1-2 Poor to Fair
PM Report and Short-Term Forecast for Santa Cruz: Small-scale surf in the water this afternoon thanks to a minimal blend of fading SW swell and minor NW windswell. Most of town is down around knee high, while standout summer points pick up a few inconsistent waist high plus sets. The tide hit a 2.1′ LOW just before noon and climbs back up through the remainder of the afternoon, eventually reaching a 5.6′ HIGH at 6:13pm. SW to westerly wind now along with some bump and crumble to the ocean surface.
1-2ft
2ft at 14s SSW (209°)
0ft at 14s WNW (284°)
0ft at 9s S (180°)