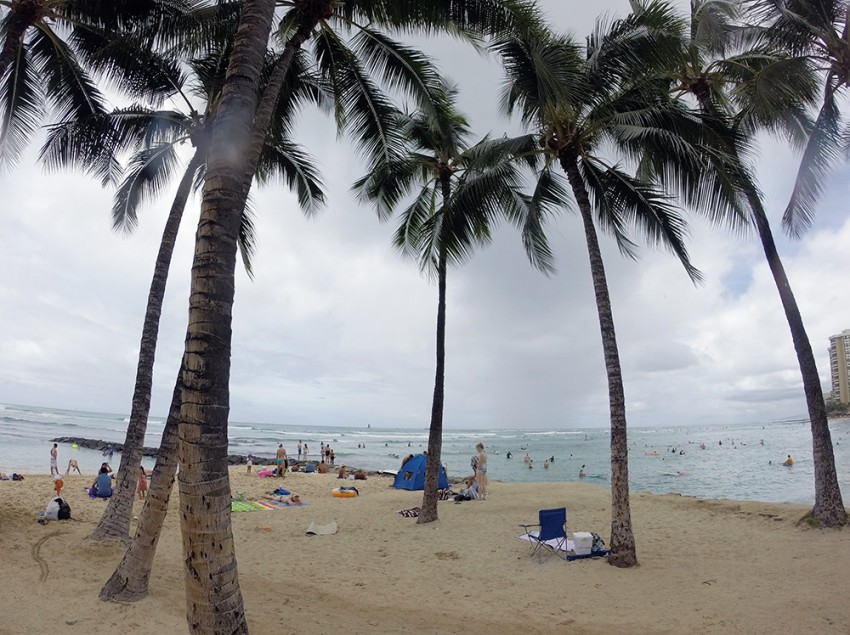 All excited, anticipating the new SW swell last night and couldn’t wait to get up and check out the waves. From the lanai looking south towards Publics, it looked encouraging. The super moon is in effect and with it, a big tide swing. In the Bay area that tide swing can mean it goes from negative low to an extreme high. Here on the south shore it seems the tide generally just goes between slight negative to a couple of feet. The super moon meant that the high tide was pushed out until much later in the afternoon, which is great. Looking towards Publics, the lines rolled in breaking farther out on a low tide, exposing the reef. Once we made it to the beach street-level, you could see the lines out the back, made more evident by lines of breaking waves and offshore spray all the way to the horizon. Such a thrill to seeing the ocean come alive. There’s the visible energy of waves, made more brilliant here by the sparkling turquoise water, the palm trees blowing in the wind, the heat of the sun. Today was a rare overcast day, adding to the drama. At Walls, bodyboarders were going nuts getting much steeper waves than the past few days. There was an outside to Walls, where later I saw a short boarder do multiple turns before kicking out. The outside of Queens and Canoes was also firing with offshore spray and there were spots in between that I’d never seen breaking before. The sweet sight of swell brings anticipation, heightened sensations, and a collective stoke that you can feel when you’re in a surf spot.

Amazingly, my favorite Takayama board was available again. Had to pay the full price since the boss was there, but even he now knows I’m “Chang” and then doesn’t charge me extra by now for staying out for 2+ hours. Max was geared up with his remote GoPro, but this time on a Koa board with a board mount. We decided to paddle out to our usual spot at 2D and gauge the situation from there. Just paddling out, you could feel and see the difference today with the 3-4’ @ 16s. Ones you might have casually paddled over, you wanted to hustle more than before. Because of the lower tide, you had to paddle over multiple lines of breaking whitewater, which depending on where you were right or left of the towers or farther in or out to the horizon, could be fairly steep sections of water blasting at you. On the inside, beginners were struggling to stay in position or on their boards. A couple of instructors were out but mostly by the sandy pit by the Outrigger side. As I sat on my board after getting out, I watched as the first of the next set rolled through. The main right tower peak of Canoes was steeping up bigger than I’ve ever seen it. It bowled around towards me, but you had to be on the other side to catch it, and I saw several surfers paddled hard for that wave, but only one make it dropping steep and fast directly into a left turn (or you’d get chonked). I was essentially on the shoulder of that peak, watching it roll over towards me, but knowing it wouldn’t break again as it “bowled over” by the shape of the reef below. I chose to go for a smaller, in-between wave that had the right shape and dip where I didn’t think it would pitch. Luckily, I was right and I got my first wave of the sesh, blasting through the inside on a left before straightening out. Cool. The paddle back out took a while, given that the set waves were pretty nonstop and breaking so wide that there wasn’t much of a smooth spot to paddle through. I paddled left to get to a spot where oncoming waves weren’t breaking as high or fast. Got back out and noticed Max was still more towards 2D. Felt a bit crowded over there for me and the wave was wrapping and most breaking there, so I decided to go more towards the right tower. Still on the inside of the outside at this point, watching as set waves jacked up. Sometimes, a local long boarder would nail the fast takeoff and stay high on the wave speeding left and doing a few power turns. Impressive. A female surfer on a board that looked like an 8’ Junod was getting good lefts. Other times, a surfer would eat it on the takeoff (ouch!) or almost run into another surfer. I didn’t want any part of that given the size and power today so I waited on the inside of that. Got a fast, long right from there that took me far inside again. The next set waves started pummeling in as I paddled back out. I kept going, angling right to go over each successive peak to try and line up for an outside one. Some of those were steeper than I thought. Better wait to be in the right spot. Finally I was on the outside, awaiting the next set like everyone else. After just a few minutes, big lines started to look on the horizon. The pack started to move into position or to paddle farther out. I waited to see what this set would do from this spot. Over to our left was the takeoff for the main peak and when someone got one, they came practically barreling left, then down as it bowled. Such an intense sight to see. I went for two but one was too far over and another I wisely pulled back on as it jacked up. I went for the next one that had a long line from left to right. If I was going to get it there, I’d have a nice left. Sure enough, I saw the peak rolling towards me without anyone on it, paddled hard and was able to catch it at an angle and went left. Quickly on my inside was a surfer forcing me to do a fast carving right before continuing the ride – it was all one, long continuous motion and a big swooping turn – that felt incredible and happened so quickly. Epic in my mind.

The sole outrigger came back to the line up and was chastising the surfer that commented on the Takayama board earlier, and who had caught one of those steep main peak lefts. He was angry that he had gone on the same wave, which we had learned was considered rude earlier from an instructor. The canoe guy is a local who’s clearly adept at handling a boat full of tourists. He had a little girl, probably no more than 3 years old, sitting in the boat, too. They went for a big set wave and as I watched them paddle for that big, steep wave, I hoped for them that they made it. Another amazing sight when they did.

Max and I stayed on the outside for a while, negotiating positioning and waiting for the right wave. I managed to snag another one of those lefts like the other one. So sweet. So fast. I had a couple of ones where I paddled hard but was off the spot by a few feet and didn’t catch it. Instead, you got to look straight down the steep face of the wave you didn’t catch while the next line of surfers paddled for it until you lost sight of them behind the wave. I had one where I mistimed it or the wave was in a wacky spot that pushed up and made my board pearl.

After that, Max had moved more to the center spot to go for one. I was still on my way back out from a wave when I suddenly saw his board in the water shooting past me and to my right. I switched direction and paddled over, waiting for his head to pop up and when I didn’t for some time, my heart skipped a beat. Then I noticed there was no leash either. The board had shot toward an older surfer on the inside who had luckily grabbed it. I held onto it while Max swam over. Luckily, everything was fine, other than his leash broke while paddling over a set wave. I urged him to go in, but we ended up staying out longer. He shot some videos of the main peak while I managed to snag two other waves near the middle.

It was a sesh to remember, just like those three or four bigger days at Capitola, and those at Linda Mar. Bigger days where you’re constantly aware of the power of the ocean and on your toes. The days that challenge you to know your limits or to recognize that you’re ready to go for it. The feeling I love – being out in the ocean on your board watching a bigger wave than usual roll in from the horizon and wondering if this is the one, the one that you’re ready for. It’s something to measure yourself by. This time, I got waves that were more challenging than last year and I hope by next year, I’ll be ready for the ones I thought were too big this time. The challenge is to get home and stay motivated to become a better surfer and a better water person. The lure of getting bigger waves and being proficient in those conditions is just too much to ignore. This has been an epic 16 days off, between Kauai and Oahu. So much aloha (left Lorelie a card for the snack basket and an ABC gift card for Tony) and so much stoke. It’s going to be hard to return to normal life. Mahalo and a hui hou!

Report for the next day but it was similar:
3-5 ft- waist to head high
GOOD CONDITIONS
SOUTH SHORE AM UPDATE AND SHORT TERM FORECAST: SSW swell peaked overnight but is still providing some SOLID surf for town shorelines this morning. Most locations are seeing waves in the waist to shoulder high range with the better exposed locations seeing some head high to near overhead high sets. This swell should pulse a bit on the large incoming tide this afternoon and then slowly drop throughout the rest of the work week. Mostly sunny with isolated showers. Light easterly winds in the morning becoming east winds 10 to 15 mph in the afternoon. Chance of rain 20 percent.
5-6ft
5ft at 15s SSW (193°)
1ft at 14s SE (150°)
1ft at 8s SSE (151°)