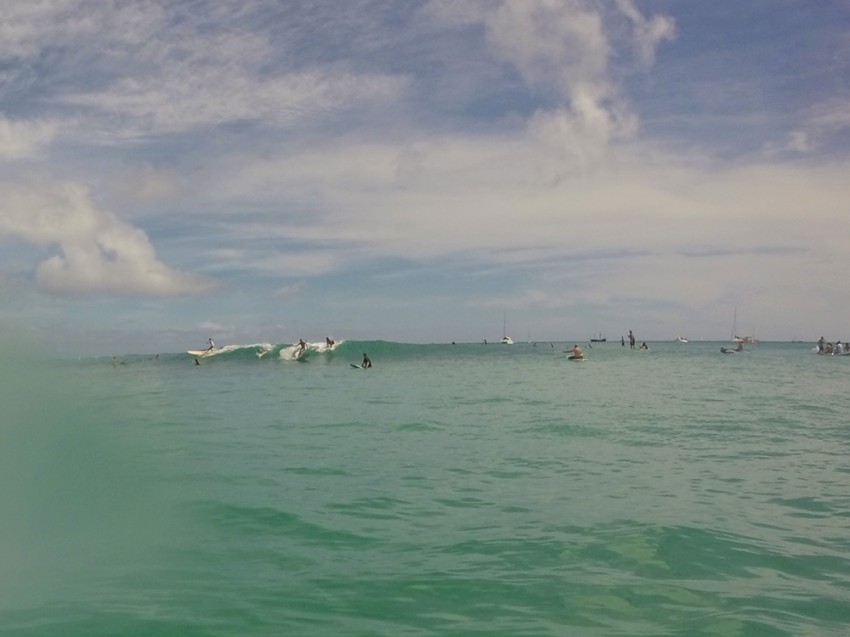 Carissa Moore (far left) ripping a carve on a longboard at Queens.

Got a late start, but then ended up being at the beach at just the right time to meet Carissa Moore before the Redbull Party Wave event started. She was very sweet and gracious. The beach was busy with Sunday fun day and the Redbull event at Queens (and the past two days with the Aloha Boardshop Fish Fry), and then a canoe race over by the Outrigger, with that side of the ocean roped off. The main peak at Canoes was crazy crowded. Managed to get a few waves over there, and also managed to avoid getting run into by newbies who were letting boards fly in the air or right at other surfers. Max was getting rides and filming them with his new GoPro remote, but I decided I needed some peace and paddled left over to Queens. Sat on the shoulder to observe. I snagged a smaller one where the peak split and was pretty happy about that. Still lots of folks out, including two big, group, floaty paddleboards – turns out Carissa and crew were on that and I saw them whiz by. Later, she caught a couple of waves on a longboard at Queens. Cool to see her surf, and share the lineup, even briefly! The new building SW swell was creating a beautiful wave at Queens, steepening up as it hit the reef. More swell anticipated for tomorrow. Now, if I can just get up and out there before the crowds…

2-3 ft- knee to waist high
FAIR TO GOOD CONDITIONS
SOUTH SHORE AM UPDATE AND SHORT TERM FORECAST: New SSW swell (200-170°) slowly starting to fill in for town shorelines this morning. For now waves are in the knee to waist high range with some inconsistent sets nearing the chest to shoulder high range. Watch for this swell to build further throughout the day and peak early tomorrow morning with surf nearing the head high to near overhead high range. Sunny. Isolated showers in the morning. East winds 10 to 20 mph. Chance of rain 20 percent.
2-3ft
2ft at 14s SSW (192°)
1ft at 11s SW (211°)
1ft at 10s SSE (156°)