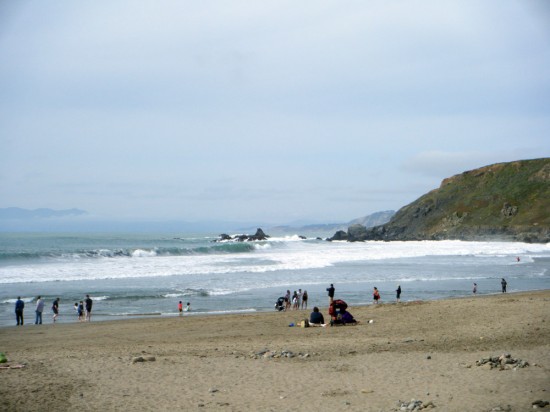 We had a short window for a surf late this afternoon and headed down to LM. Conditions were actually supposed to be good today, with Magic Seaweed rating it 5 stars, something I’ve never actually seen at LM. But by the time we got out around 3:30 pm, the low-tide was rising again and it was mostly closeouts. There were about thirty surfers out in the water and as we watched most of them wipe-out, we decided to take it easy today and just go for a few safe ones. I had a fairly easy paddle out despite the chop and had a chance to sit up for a while on my board and watch the incoming set. The first wave I went for caused my board to pearl pretty hard although I was able to recover it and ride for a few seconds. The next wave I went for was fast and unruly and forced my board seemingly straight down. Thankfully, I had my helmet on so I wasn’t worried about my head, but in those few tumbling moments as I wiped out, I wondered if my board was okay, hoping that thud I had heard wasn’t my board hitting the bottom or a rock. Luckily, it was fine. The next several waves were just reforms but even then, they were sloshy and fast, and after getting a short ride on one, I tumbled a couple more times on others and decided that it might be time to call it a day. On my way in, a guy with a yellow short board was walking in with a bloody gash on his head. I was sooo glad I was wearing a helmet.

I hadn’t seen Max for a while and looked for him from the water. I knew the current was pushing surfers towards the north end, but I kept thinking he was this other surfer in the distance towards the south wearing a black helmet/hood. I can usually spot him but today proved otherwise. I finally got out and walked up and down the beach. After what seemed like 15-20 minutes of looking, I was relieved to see him walking up the beach from the north end.