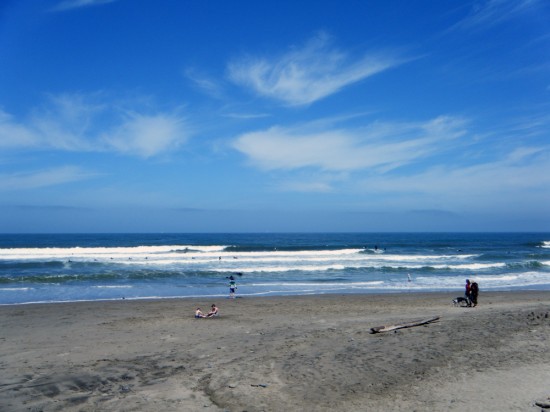 It’s been busy since we got back from Oahu and our car was out of commission for a bit, so we were especially psyched to finally go surf today after three weeks out of the water. We thought about going to HMB but decided that even LM would be good for a maintenance, “get back into the swing of things session.” Sure enough, LM was a lot of fun, despite a mediocre surf forecast, we had the benefit of rising tide. I was happy to be back in the water paddling through the chop, sitting up on my board on the outside while the 4′ rodeo waves rolled in. I went for a few but mistimed it a bit or the wave changed shape and direction, moving more to the south of where I was. The sets today were fairly dense with rolling waves and a few closeouts but definitely a few workable corners.

There were lots of surfers out near the far southern end, a group in the middle, and no one at the north end. I moved farther south and in towards the beach. I made the next wave I paddled for, catching it at the right moment, making the 3′ (?) drop, but couldn’t pop up to my feet in time. Body-surfed it for a bit instead ;) It was an easier paddle back to the outside where I hung out for a while during the lull between sets. I had seen Max go for a wave on his shortboard before I lost sight of his head as the back of the wave swelled. I figured he was heading in, so I paddled in catching a nice little reform on the way in. It was a friendly crowd today, with lots of smiles and head nods. After all, it’s a three day weekend and the sun was shining and it’s finally warmer than 55 degrees. Woo!