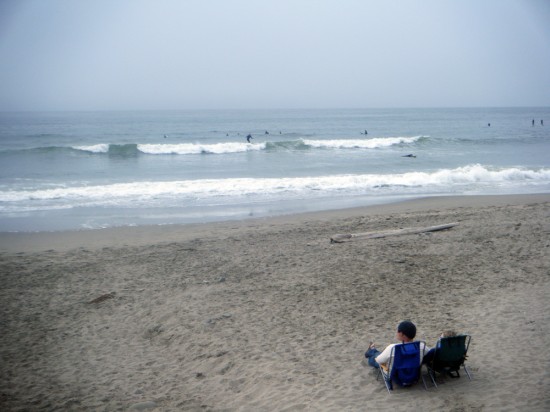 After we were done with our work and our meetings had ended for the day, we checked the LM cam and saw that the waves seemed mellow and there were a handful of surfers out catching waves in spite of heavy fog. It was blazing sun in San Francisco, but sure enough, as we rounded the corner to 280, we could see the fog rolling south. By the time we got to Highway 1, it was completely fogged over. I love it when it’s like this.

High-tide had just peaked and the best break was out in front of the pump house, where a group of surfers lingered fairly close to the beach. Today had to be one of the easiest paddles to the outside ever, with no chop and such a short distance. While the pelicans dive-bombed for fish, Max and I chatted and waited for sets to come through. He thought he saw a dolphin, though I wasn’t sure. He turned out to be right! Later, as we were talking to our friend, John, we saw what turned out to be a pod of dolphins – at least four of them. They were swimming and jumping not too far away from the lineup. So beautiful. Fun surf sesh.

#64 / 4:30pm
[2-3 ft + knee to chest high. PM REGIONAL OVERVIEW: Weak, crumbly, sloppy surf prevails this afternoon as onshore flow continues as does our combo of NW swell mix and SSW groundswell. Better breaks are good for knee-waist-chest high+ surf, with plus sets for top breaks as the tide fills in to a late afternoon high.]
[Veg from Lee’s; Clif bar]