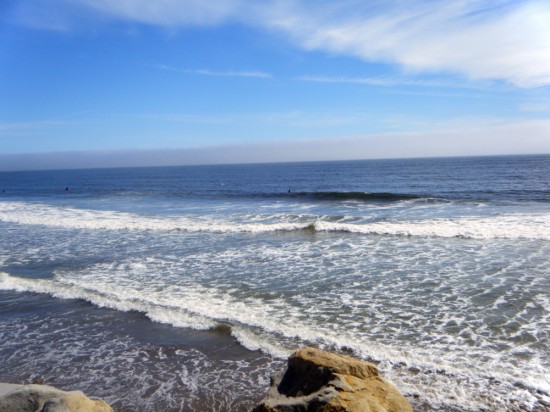 We went down to HMB this afternoon since the conditions were supposed to be around 2.4 feet with a nice SSW swell. Sure enough, the conditions were good with several breaks going off all along the beach. At the Jetty-side, there were a several shortboarders and a SUP catching some good rides. Farther south, a few longboarders were paddling out and catching a few here and there. We stayed at the south end, with a nice break to ourselves. The weather was amazing today – high 60s and sunny.

I’ve only surfed the Jetty one other time and driven the same route to see the Mavericks contest in 2008. This time I was struck by the vast openness of the break, the breathtaking beauty of driving through the s-curves of the coast-side mountains, and the wild foliage everywhere. It even smelled like ocean. We had a great mellow surf, catching lots of reforms on our longboards. I’m back to surfing without gloves again since I’ve been back from Oahu and loving it. Thinking about going without booties next time too. Can’t wait to keep surfing this break and getting better.

#65 / 3pm
[3-4 ft Light and variable southwest winds with smooth seas. Small long period swell from the west. 2ft @ 13s from SSW. REGIONAL SUMMARY:Coastal fog is making it difficult to get a good look at the surf in some areas. We have a continued mix of SSW(200-180) groundswell and WNW mid-period swell on tap this this morning. Better breaks are good for waist-chest-head high surf, as top exposures pull in some sets running just slightly overhead. Conditions are semi-clean, but there is still plenty of leftover lump/bump to the surface.]
[Vegan burger]