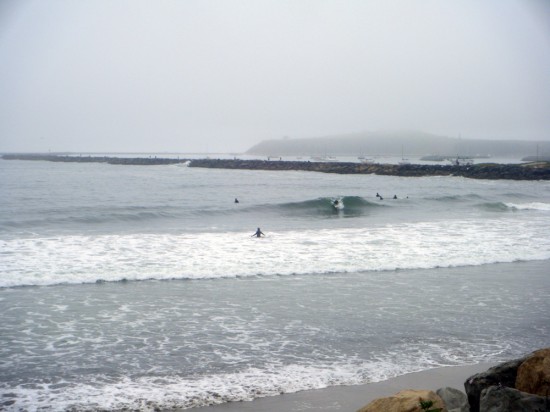 Max and I went to the Jetty again late this afternoon for another fun surf. Conditions were relatively the same as yesterday with a continuing 2ft @ 13seconds SSW swell. It was completely foggy today but still warm with temps in the high 60s. I decided to go with my 7’3″ Superfish this time, after exclusively surfing with my 9′ Mitsu for the last 30+ sessions or almost 9 months. Had no idea it’s been that long! Must say I really enjoyed the maneuverability and smaller size of the 7’3. It’s also a lot more buoyant than the 9′ because of the thickness, width and epoxy body. Had such a great time and caught numerous fun reforms. I’m also loving the lack of crowds at the Jetty. We pretty much had the smaller southern break to ourselves, except for one other guy who was farther on the outside.

#66 / 3:30pm
[4-5 ft Light and variable west-northwest winds with smooth seas. Small long period swell from the west. REGIONAL SUMMARY: WNW mid-period swell is up slightly this morning and is continuing to mix with small SSW(200-180) groundswell. Better breaks are good for waist-chest-head high surf, with top exposures pulling in some overhead sets. Light/variable Southerly winds have some of the more openly exposed breaks a little bumpy/crumbly, with select areas looking clean.]
[Vegan burger]