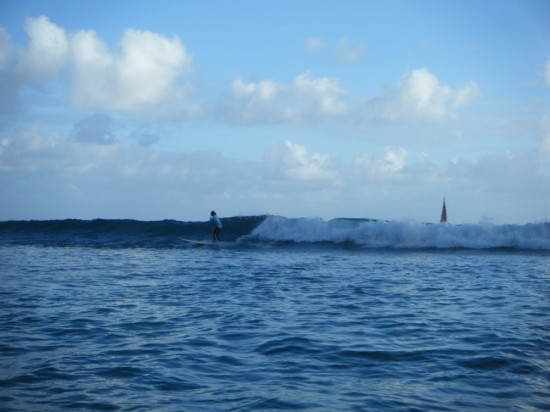 Wow, what an awesome day at Canoes. The weather was perfect – 80s and water around 75 degrees – and the sun was shining making the ocean sparkling shades of aquamarine. We got in two great sessions. Max tried out a Firewire 6’6″ shortboard and it was great to see him able to paddle and balance easily. During the first sesh, I snagged four rides, including two super long ones in from the outer break where I had the chance to do a couple of turns and pump near the end to keep it going.

The only downer to the day was a run-in with a stand up paddler which left a long gash on the bottom of my board. I didn’t even notice it until we were heading towards the showers and one of the local surf guys said, “Hey, did you see the bottom of your board? Looks like you hit a foamie.” I had been turning around to paddle back to the outside after catching a wave, and an incoming wave caught my board on the side, flipping me over and sending my board into the board of a stand up paddler who was in front of me in the water. She’s one of the locals that I’ve seen several times on our last trip. She’s usually ripping it up on the outside at Canoes and Queens and I’ve often admired her skill. I felt bad that my board hit hers and apologized right away. Not looking at me, she said “f*ck, I knew that was going to happen!” Canoes is obviously a beginner break and if you’re as experienced as she is, it’s easy to avoid incidents. I countered “why are you hanging out here then?” but she was already paddling away. Maybe she was having a bad day, but she lost some of my respect by being so hostile. I’m not even experienced and have had my share of beginners crashing into my board. Rather than get mad, I usually ask if they’re ok and if it’s appropriate, explain what they might want to try next time (pulling back, turning to avoid collisions, etc). Anyway, I had just caught two awesome rides so I wasn’t phased.

After taking a food break we headed back out to surf until sunset. I got another two perfect long rides from the outer break all the way in. So happy. I’m feeling really strong and getting into position is becoming second nature. Today’s sessions were among my favorites. The water felt so good I really didn’t want to get out. While I love surfing my home breaks in NorCal, it’s just not the same as surfing in warm water with the beauty of the islands all around you.