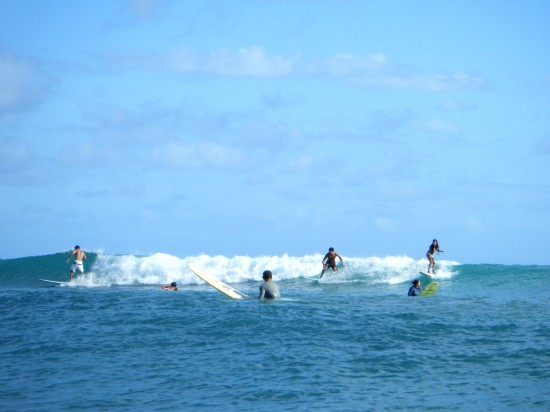 It was another gorgeous day in Waikiki. We had a big breakfast (probably a little too much food, actually) and headed out for our first session. It was definitely more crowded today since it’s the weekend but still a mellow group. Since we’ve been coming to Oahu, we’ve noticed an increasing number of stand up paddlers. Luckily, they’re usually pretty good so you don’t have to worry about them wiping out near you, but there were one or two waves today that I pulled back on because a SUP was zooming by. Sets were coming in less frequently and the waves were a bit mushy. Because it was getting close to high tide, the waves weren’t as good since Canoes is best at mid-low tide. I did a lot of paddling for waves that sloshed out. Nonetheless, I managed to get two rides before we came in for a break. I also saw a giant fish surf through a barrel of a wave! I was sitting facing out for a minute watching the waves roll in. It must have been at least two feet.

Our second, late afternoon sesh (4pm) was timed perfectly for the tide dropping from high to low (7:40pm). Had an amazing time paddling to the outside, catching a wave in, paddling back to the outside around the right. Repeat! I ended up catching five long waves. I also got a chance to try a top turn. So far, I’ve been able to do long s-curve turns going straight and also smooth turns to the right or left. I tried a top turn to the right on my last wave, but realized as I was doing it, that I should’ve turned left to keep the momentum and not kick out. Still learning :) but it felt great to do the top turn. Can’t wait to work on that/try it again. 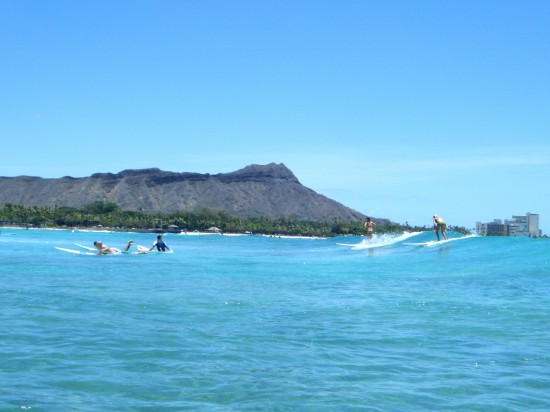 At the end, Max and I traded boards and I tried out his 6’6″ firewire board. It felt much shorter than my 7’3″ Superfish, less stable, but much more maneuverable. The Firewire is a super-responsive and fun to balance on, with a wide and thick middle so it’s much more stable than you would expect, but short enough and with enough rocker that you can pivot easily. I could feel it picking up on the waves even on the inside. Might have to give it another try sometime soon :)