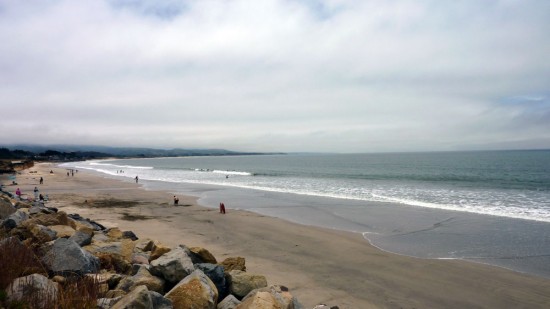 Even though it was supposed to be small and nearing low tide, we had a window of time for a short surf and headed to the Jetty. It was foggy with temps around 60 but little wind. On the way there, we saw a car with a perfect bumper sticker: “fog is my copilot” :) There was a group of kids on the beach playing soccer in their wetsuits, and later surfing and body boarding. We saw the van on the side of the road and assumed they were with Jetty Betty Surf School. I caught a bunch of small waves and got in some paddling exercise. Max had a great time again on his shortboard. Even though we were just on 1 foot reforms, he was still popping to his feet. Looking forward to the next swell for some more size and power!

#75 / 1pm
[1-2 ft Light and variable west-northwest winds with smooth seas. Small short period wind waves from the west-northwest. REGIONAL SUMMARY: A small, sloppy mix of old/fading NW windswell and trace SW-SSW swell continues this morning. Most breaks have knee-waist high+ surf, with standout NW exposures pulling in a few sets up to chest/shoulder high at times. Conditions are still looking fairly jumbled across the region this morning with steady onshore flow out of the W/WNW. ]
[Cliff bar]