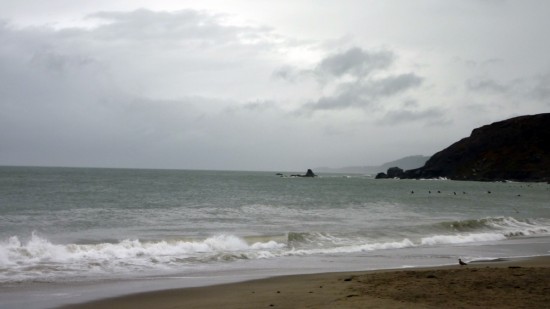 We switched our night-owl habits last night to match Daylight Savings Time, gained an hour of sleep as the clocks rolled back and got up at 7am and down to the break before 8am. It was raining in SF as we left and drizzling in Pacifica when we arrived with high winds and overcast skies. There were already 30 surfers suiting up and in the water. With a WNW swell and incoming tide, the sets were rolling in towards the north end and breaking really close to the beach. Spray shot off the wave crests from the high winds. All the same, we were psyched to be paddling out in the rain for an early Sunday surf. We didn’t anticipate catching many waves given the conditions but mostly eyed the horizon, and paddled through the chop to stay from drifting northward. Large California brown pelicans swooned and surfed along the shore-break and we could see their right wing touching the crest as they skimmed gracefully above the waves.