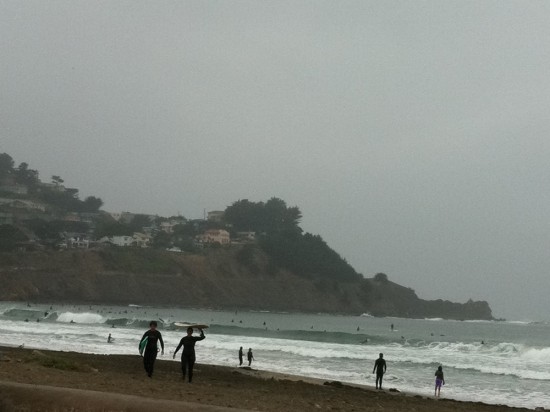 Took this post-surf from the car since it was raining

We were excited to meet up with Cynthia and Luke at LM this morning. We haven’t seen Luke in a long time and even though we’ve been active Twitter and blog friends with Cynthia for over a year, we haven’t met her in person. It was great to finally meet up and surf together! We felt bad that we were running late and rushed to get down to LM.

Luke caught some good rides on his 9’6 early on near the south end, while Max, Cynthia and I were closer to boat docks. Cynthia was a bit farther in catching rides on her shorter 7′ while Max and I searched for peaks on the outside, then realized the current was pushing us farther out. 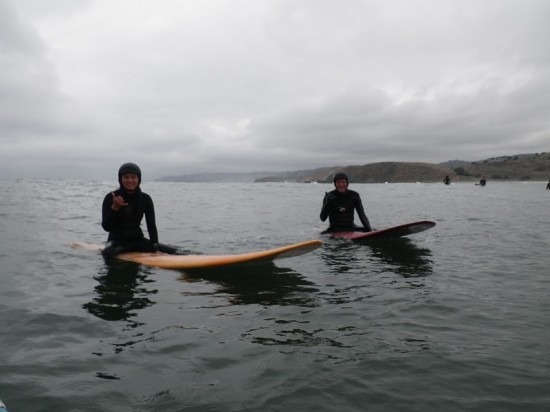 Max and I. Photo by Cynthia.

It was smaller than yesterday and the waves were weaker. Max got some good rides, but I wasn’t as energetic (didn’t eat enough this morning) and focused (having fun socializing) as previous sessions, but managed to catch one good left and two other short rides. Both Luke and Cynthia mentioned to me that I was too far back on my board when paddling for waves. Just earlier, we had been talking to Izzy out in the water and he mentioned the same. We needed to be farther forward to catch today’s weaker waves. Still figuring out exactly where to be on my new board. Yesterday and the day before on steeper waves, my position seemed to be working. Good tip about today. 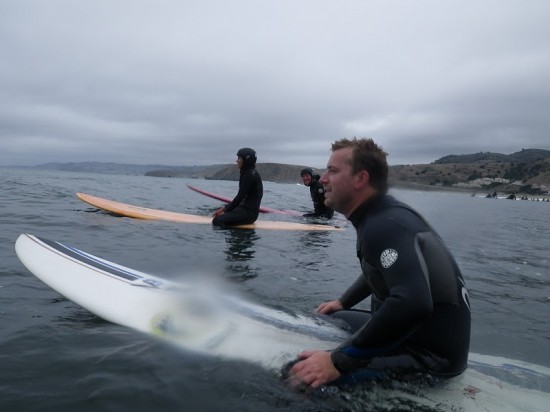 Luke joins us after getting barreled farther north, wearing kelp on his head.

Cynthia shot a short video of us as we paddled for a small wave. I got it but then came off as the wave mushed out.

On the way in, I was trying to avoid kelpville by paddling farther north towards the beach, but still got my leash tangled in thick kelp and lots of kelp in my hair. Even after a shower, I found a small piece of kelp hidden in my hair. It’s resilient stuff for sure.

Afterwards, as the fog lightened and the rain began to fall, we headed down the street to Fog Fest to meet J-Bird and buy one of her surf-inspired Birdswell t-shirts. 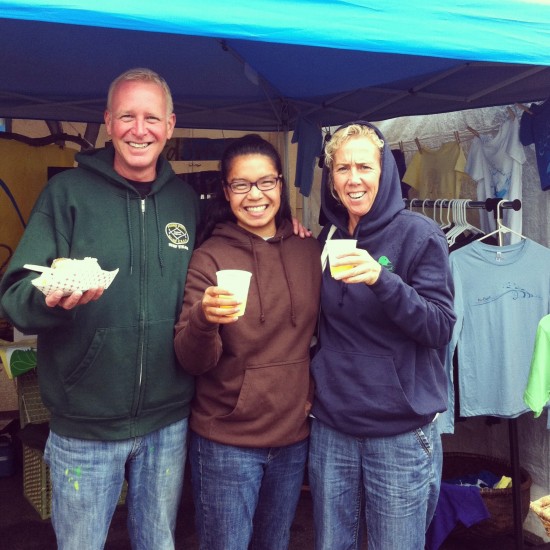 Max, J-Bird, Denise. Cheers with a baked potato and mimosas :)

Izzy let us park in his driveway since he lives right near Palmetto Ave. We met Cynthia’s husband, Scott, and J-Bird’s friend, Denise. We ate a delicious baked potato covered in roasted corn from one of the stands and Max bought a “got fog?” t-shirt. Chatted some more with Izzy at his house about the barrel he got and ate some delicious peach cobbler made by his daughter who’s a pastry chef at the Ritz in HMB. Fun Sunday!