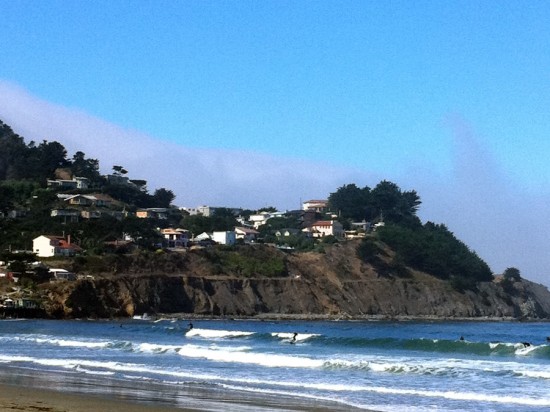 Another gorgeous warm day. Another fun surf at the south end of LM. Lots of fog as we drove down 280 and into Pacifica, around the bend past Rockaway, then it was mostly clear at the break. The fading NW-WNW swell was still making the north end a large blown-out mess; the middle was closeouts, but the south looked pretty good. The lulls between sets were much longer today than the past few days and we sat on the outside with a group of about twenty other surfers (including Greg and Michelle at first; then Rick later on). Everyone kept repositioning trying to find the left or right. I paddled unsuccessfully for several waves at the beginning and ended up either too far left or right of the peak. But then there was that one set wave that rolled in after I had missed the first wave. Wow. I could see it coming, repositioned a bit, paddled hard, caught it and made the drop. How long is my board going to keep going down?! To my right a surfer shouted “woo!” as he watched while paddling back out. I rode it for a few seconds before I fell off the back. Soon after, most of us moved farther in as the tide shifted. I caught a nice rolling wave on the way in and rode it all the to the beach. As we pulled out of the lot, the dense fog had rolled in quickly. You could just barely see the ocean and the surfers.

[REGIONAL SUMMARY: In the water we have easing NW-WNW (285-315) groundswell and small S/SW swell-mix. Expect the surf to be in the head high to 2-3’+ overhead range at top exposures but with some surface texture/bump likely as winds are onshore out of the WSW.]