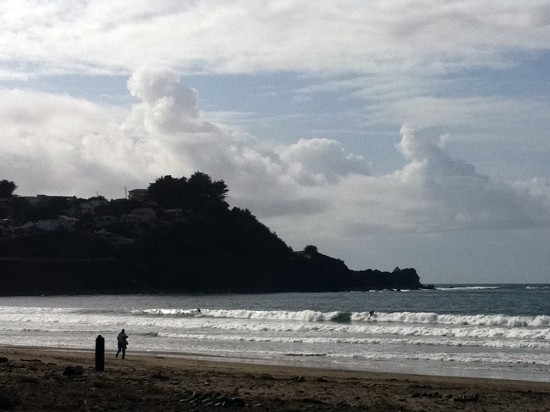 Colder weather and rain arrived in California on Monday and was supposed to continue through tonight. Luckily, there was a break in the weather today and we had some time so we headed for LM after checking the cam. The onshore wind was fairly low when we arrived and the waves were mixed with fairly long lulls between sets. Still, we saw some waves come through and a small group of surfers at the south end catching some rides. The sun was out and it was a rare empty day with only about 15 surfers out in the water and a mostly deserted parking lot. We chatted with two guys that were unsuccessfully trying to catch waves near us. Max gave them some tips on paddling. One of them said they were wiped and had been out for three hours already. The wind picked up during the sesh. On one wave, I had to lean way down on the front of my board to stay on the ride while the wind blew. Despite textured chop and uneven waves, we managed to get four rides each and had a blast. When we got home, Apple had just released news that Steve Jobs had passed away. We joined the rest of the internet on social networks to mourn his loss and remember his life. I wrote a few words on my blog. 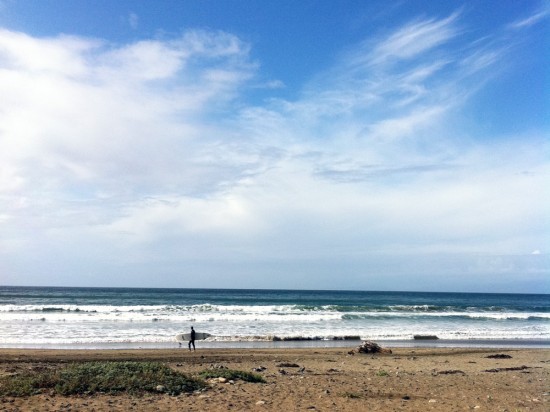 [3-4 ft waist to chest high. POOR CONDITIONS. REGIONAL SUMMARY:Easing NW-WNW swell and some long period SW forerunners are in the water this afternoon. Most exposures are in the waist-shoulder high+ range while top NW spots go head high+ on sets. Winds are onshore at moderate levels with some texture/bump to the ocean surface and occasional rain showers.]