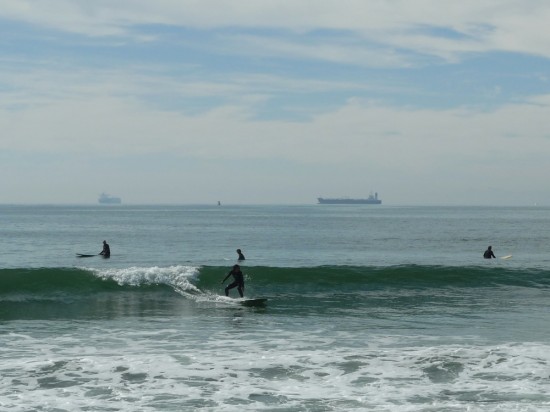 About to turn. Thanks to Max for the photo.

The weather report was calling for it to be cloudy this morning but we were pleasantly surprised with sun by 8am. It was cooler than the past two days as temps dipped from upper 80s to 70s. We were anticipating some south swell according to the forecast which was confirmed by the Seal Beach surf report chalkboard. The waves looked good as we carried our boards down to the beach. Today, it was just Michael, Max and I, and a girl named Melanie who was surfing for her fourth time. Later, we were joined by Lauren who works with the M&M Marine Biology class. Mike Jr. was busy taking care of his little boy on the beach. 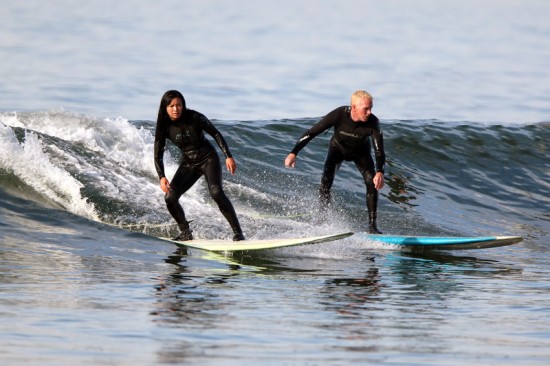 Sharing a wave with Max.

We started off more towards the middle of the beach again today and both Max and I got some great rides right off. We shared a couple of waves that split right and left. Max went left while I went right. Super fun. As the tide rose, the backwash increased and the shore break started to get pretty forceful. Melanie was having some trouble getting back out and got hit with her board a few times. At one point, Max and I traded the boards we’d been riding for the past two days (my Harbour 9′ HP1 and his G&G 10′). 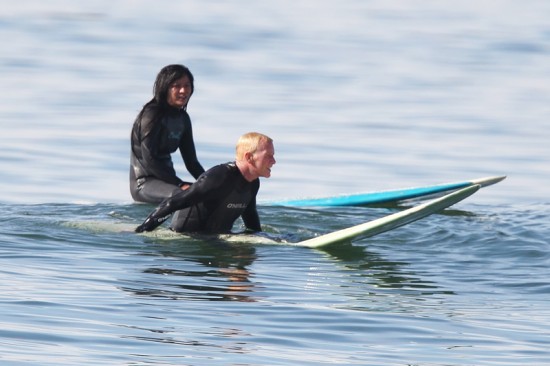 Right after we switched boards.

I got a nice wave on the G&G but getting back out through the backwash was hairy. Because of the rising tide and all the backwash, it was harder to read the waves today, even for Michael who’s been surfing since 1962. Today was the first time we paddled for numerous waves and didn’t make them. It was also the first time after surfing Seal Beach six times (about 17 hours of sessions total) that I had some hard wipeouts on closeouts and general backwash mayhem. On one wave where I made the takeoff and turn, the rest of it was like riding a water rodeo. Up, down, up, down, as the actual wave I was riding mixed with the backwash waves. 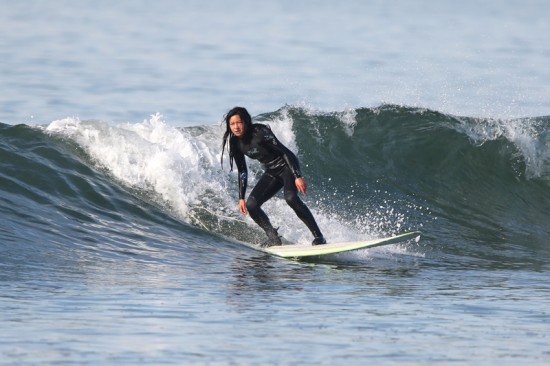 About to go right!

High tide hit at 10:28 and we moved closer to the pier as the earlier crowd split. Melanie had gone in as she wasn’t having the best time. I managed to get three rides, despite several that mushed out or that I couldn’t get enough speed to catch. On one, I paddled for a fairly big wave, made the steep drop, but then got thrown off the back and tumbled several times underwater while I held onto my board. When I came up, the guy next to me who we’ve said hi to before in the parking lot, was also in the water holding his board and shaking his head. “Did you go through the spin cycle?” I asked. “I think my head’s still in it!” he answered. By the end of the session, it was just Michael and I out by the pier waiting for a set. I really wanted to get a decent one before we headed in. The last one was pretty good and luckily Max got a photo of it (above). Looking forward to tomorrow when high tide will have shifted past 11am and we won’t have to deal with psycho backwash! Also looking forward to seeing if Dave got any good photos of us surfing later tonight. (Update: thanks toDave Peetersfor the photos above.)

[2-3+. Fair. REGIONAL SUMMARY: Swell-wise, we have building SSW groundswell and fading NW swell on tap. Shape is fairly peaky for the beachbreaks, with size in the 3-4’+ range. Top spots see a few head high to slightly overhead sets.]