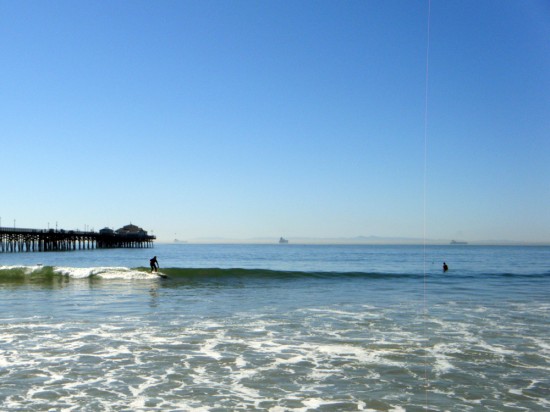 Today was another sunny, glorious, warm morning at Seal Beach surfing with Mike and Michael. Again, I lost track of how many waves we got. It was non-stop for three hours! We were joined this time by Claire and Craig, from Chicago and LA. Yesterday afternoon in Seal Beach was marked by a tragic shooting of nine people at a hair salon just a couple of blocks from where we’re staying. We saw the cop cars and helicopters as we were driving back and wondered what was happening. It was all over the local and national news within an hour or so. Sadly, Michael actually knew one of the people that died. He got calls from friends around the world who wanted to make sure he and his family were ok. One of them was Peter Heller. We got to talk to him on the phone today after surfing. What a nice guy to take the time to talk with friends of Michael and fans of his book. I thanked him for writing it and being an inspiration and for introducing us to the Saint of Seal Beach and M&M Surf School, without whom we wouldn’t be making such progress with our surfing or having so much fun. I asked him whether he’d been surfing recently since he lives in Denver. He said they had taken a trip to Mexico recently and were going again sometime soon for a month. Max told me later that Mike had mentioned Peter bought a house in Mexico, right near Puerto Escondido, the famous break where he got his first barrel. So apropos. 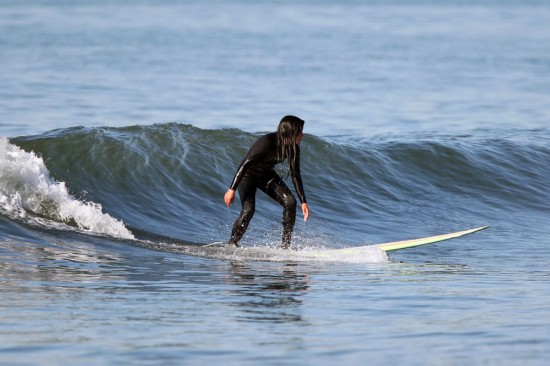 Going left. Thanks to Dave Peeters for the photo.

I was looking forward to being back on the Harbour 9′ HP1 today. I’m loving this board and thinking about getting one in the future. It’s so fast and responsive. Later, I had the pleasure of meeting Lloyd, the man who had actually donated the board to M&M. He paddled out mid-sesh and was happy to see I was loving his old board. He turned out to be an amazing surfer. The first wave he got, he went right to the nose on his longboard. On another one, he stepped his way 360 on the board right after taking off. Later, he paddled into a wave fin-first, then flipped it around as he went down the line. With his expert moves, all-white hair and fit physique, he was full of style.

We started the morning surfing near where we were yesterday, getting smooth lefts and rights. Because of the tide, we had to adjust our position and move in a little more to catch waves. The backwash was in full effect, making it easy to ride the rip back out. I was happy to get more rights today, including one where Mike yelled “turn right!” as I popped up, which instantly made me do it. Definitely excited to practice the faster turn over and over until it’s second nature. It’s starting to get that way.

After a few hours, Mike went in with Claire and Craig, while Max and I stayed out with Michael. We had already moved closer to the pier to catch waves and I was excited to try the bigger, faster waves that I’d seen other surfers catching each time we’ve been here. I got some amazing rides with Michael’s guidance. Watch the set wave roll in, decide which direction, wait for it, paddle fast, popup, turn, ride down the line. On one left in particular, I had enough time to pull up high on the wave and rode it longer than any other wave I’ve gotten at Seal Beach. As I kept going, I wondered, can I ride this one all the way to tower 3? Then there were the cool old guys out in the lineup, including Bruce who’s 81 (!) and funny as hell; Llyod with the smooth style; John wearing the red shorts. Great vibe. On one wave near the end, Michael and Bruce went right while Max and I went left. Party wave! Today was just pure fun: perfect waist to shoulder-high glassy waves, beautiful weather, friendly surfers, another appearance of the surfing sea lion from yesterday, and a pod of dolphins swimming through the lineup. Really couldn’t ask for more.