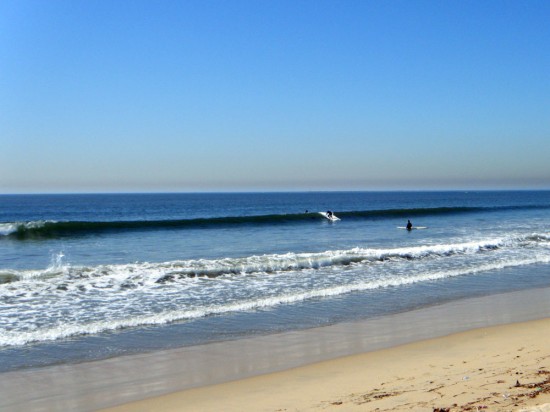 So much fun today! We’re back in Seal Beach surfing with Mike and Michael Sr. When we arrived in the lot, Michael asked which boards we wanted and I naturally said a 10′ since that’s what we’ve been on and what we were on last time we were here. “OK, sounds good. I think Mike brought some boards for you guys,” he said as he looked through the van. “How about this 9′ high performance board?” Turns out it’s a Harbour HP1 (9-0; 18″ nose; 22″ wide; 13 3/4″ tail; 2 3/4″ thick). At first it felt so tiny and unstable after my thick 10′ Koa board, but I soon loved it. Got the first wave I went for, a swooping left. Rear foot on the tail and turned like a dream. I had to adjust my position on the board while paddling, an inch back, half an inch forward, but otherwise, it felt like the right board for me. Max was on a 10′ G&G noserider that was originally Michael’s, now the one his wife usually surfs. We both got more waves than we could count. It was endless wave after wave. Get in position, catch it right or left, paddle back out, chat and wait for the next wave to roll in. Repeat. The most memorable ones were lefts: a fast turn, the wave behind my shoulder, a smooth open face in front of me. Then there was the wave with the right to left turn. I can’t describe them all, but I definitely got some of the best waves of my life today (in control, turned quickly, rode down the line).

This time Mike was on a board too, giving us tips and catching waves here and there. One of their regulars, Shauna, was out surfing with us as well as Mark, who joined later. Friendly vibe like usual. We were psyched to feel real improvement in the fundamentals. Now it’s more about positioning and reading the waves. Tide was rising and there was some backwash so we were slightly closer to the pier rather than near tower 3. A big sea lion was surfing with us too. On one wave he was just ahead of me to the right as I went left and saw his big head popping up. Max told me later that he had felt the sea lion bump under his board during a wave. So stoked. Need a good night’s sleep. Can’t wait to surf again tomorrow!

[REGIONAL SUMMARY: Still looking fairly clean this afternoon for our peaky mix of building long period NW(295-305+) groundswell and small SSW-South swells. Better exposures offer up knee-waist-chest high waves, with standout combo and winter breaks pulling in some shoulder high+ peaks on occasion. Winds are light from the NW for a slight surface texture/crumble at the open exposures.]