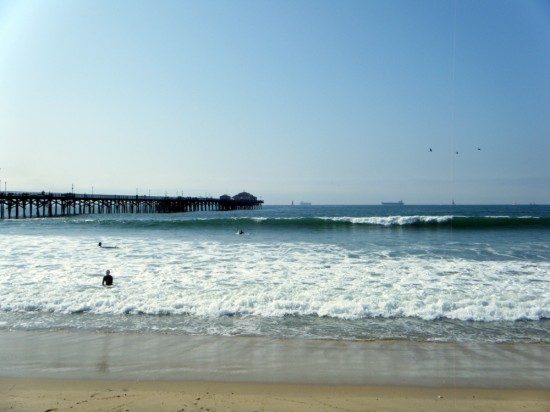 Today wasn’t the most amazing surf session we’ve had, but we still had a fun time and caught several good rides. Saturdays are always more crowded at any surf break and with M&M it means there’s a bigger class with multiple instructors. While everyone was suiting up, we met “big Jim” from the book, Kook. He’s the guy that ruled the pier lineup and had helped Peter Heller when he first paddled out to that spot. He was telling stories about how he hates it when people don’t have proper surf etiquette, and the jockeying and machoism that used to go in the 70s and even now. He talked tough but he said he wasn’t into all that anymore. He just wanted to catch a few good waves.

We started off farther north of tower 3 given the walled up conditions elsewhere and Mike found a decent spot where it was breaking left and right. I got a good left early on and was stoked within five minutes of being out. There were so many people today that Max and I hung out on the outside for a bit while Mike worked with some of the newer surfers. After four days surfing three hours each day, we took it as an easier, take-a-break kind of day. It was fun to see some of the guys we’d surfed with in August, including Carl, Keith and Paul. Being on the outside was an exercise in watching big waves roll through, paddling farther out, and making sure no one else in the class was caught on the inside. Mike was pretty occupied with such a big group and I tried to help out a woman that was out for the first time, since she didn’t know what it meant when someone yelled “outside!” and I definitely didn’t want her to get creamed. I got a good right and several lefts. Getting back out was a bit of work, given some closeouts and lots of shore break. Several times on the way back out, I paddled hard over waves that seemed at least seven feet as they walled up in front of me. I’d make it over and come flying down the backside. Later, I’d catch a wave and then just wait for the rest of the set to end rather than dealing with that again. 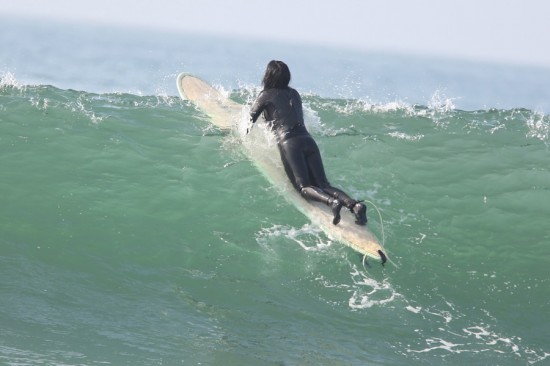 Paddling over an outside wave. For a sense of size, the board I'm on is 9'.

Even Mike took quite a beating being on the inside instructing students. After some of the class went in, I stayed out with Michael Sr. and his group of students. “Who’s ready for this one?” he yelled as a set wave came through. “I am!” I answered and started paddling slowly, waiting for the approaching wave, then faster as it neared, popped up and caught a nice big left. 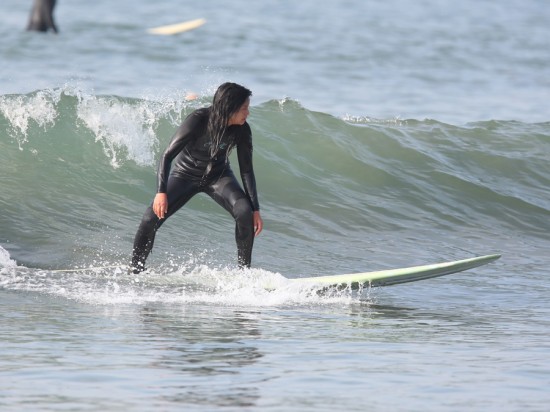 We were changing in the lot afterwards and Luke and a friend showed up to our surprise. She just went surfing for her first time with Luke and we introduced them to Mike and Michael so she can start taking lessons.

As I’ve mentioned in my last few posts, I’ve been loving this old Harbour HP1 I’m riding. I thought about getting a custom but it takes 10-12 weeks which can easily turn into 16 weeks. Shauna, who we met on Wednesday, had gotten an almost new one from her husband as a birthday gift, but it really isn’t the right board for her. She’s a lot taller than I am and above the suggested weight limit for the HP1. Michael Sr. did his magic and called Shauna. She was able to convince her husband to sell it without hurting his feelings, and I’m now the proud owner of a Harbour 9′ HP1! After surfing the HP1 for the last four days in all types of conditions here at Seal Beach, I’m really excited to try it out at my home break as winter approaches and wave size increases.

Thanks to Dave Peeters for the photos of me.

[2-3 ft knee to waist high. POOR TO FAIR CONDITIONS. North OC PM Regional Summary: We have a lightly textured mix of mainly SSW groundswell and small NW swell on tap this afternoon. Better breaks are good for waist-chest-shoulder high+ waves, with top exposures pulling in some larger sets. Most areas see some workable corners, though the beachbreaks are pretty walled on the larger SSW sets.]