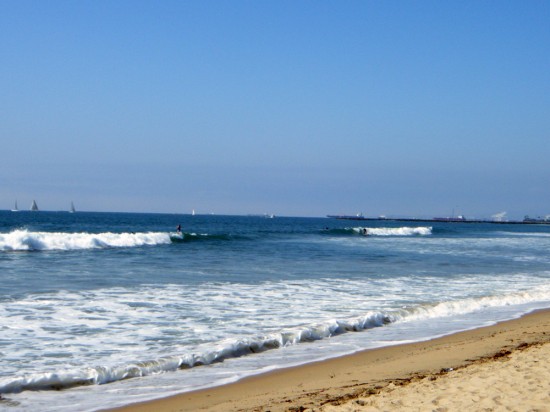 Today’s surf sesh was awesome: beautiful glassy waves, success on our new boards, mellow and fun surfers. It’s Sunday so it was a much smaller group of return surfers, including Keith, Kyle, Jimmy (who accidentally paddled out with his phone still in his shorts), Roland and Catherine. Max and I were excited to try our new Harbour boards. He got a 9′ Banana on Michael’s rec, one of only two Harbour bananas left in the store. Same high performance as my HP1 but slightly bigger dimensions in width, thickness, nose and tail to suit his size. Michael and Mike were psyched about both of them and ready for us to try them out. We were pretty sleepy and Max’s shoulder was hurting him a bit, so we took our time a bit more this morning and joined the group out in the water. We started off north of tower 3. As soon as I paddled out I was happy to see that the waves were glassy and well-formed. The sun popped out after a few minutes for Keith’s birthday. We also had company from a pod of dolphins. So beautiful. From there, it was just pure fun catching waves. I got a really perfect right thanks to Mike who had me paddle just at the exact time to make it and popup and turn right in front of the curl. Out of the corner of my eye, I could see Max and Keith on their way back out watching my ride and heard them hooting, “woo!” Then there were the awesome lefts. Smooth, fast and as Mike yelled commands, “pull up! Go back down! Pull up again!” I instinctively did what he said and finally got to experience some maneuvers beyond just riding down the line. Max told me later that Mike was super stoked and going “YES!” as they watched me rise up and down from behind the wave. Always fun to stoke out your instructor :)

As the tide shifted we paddled closer towards the pier. By then it was just Mike, Keith, Kyle on his shortboard, Max and I. The sets started rolling through and they were pretty big. I’m feeling a lot more confident these days, though. Before August, I never would have attempted anything like the waves by the pier. I probably wouldn’t have even paddled out. It’s satisfying to feel the progress and to know my skills and knowledge have increased in just the last couple of months, starting with the amazing instruction from M&M in August, and followed by the month of putting that to practice on our own in Hawaii and Pacifica. This week has pumped it up to a new level. I’ve felt the difference in making bigger takeoffs and also making faster turns and I’m even more addicted than before (if that’s even possible, ha). This week has also been amazing because Mike brought the HP1 for me to try. Because of the narrow width and thickness, it’s so much easier and faster to pivot for a wave. Once up, my turns feel much more responsive. Under Mike’s guidance, I managed to get two bigger waves by the pier before we had to head in. Incredible morning with incredible people.

[REGIONAL SUMMARY: We’re still seeing some decent shoulder-head high sets work through this afternoon at the good exposures, but westerly wind has picked up and surface conditions are now textured/crumbly. Our dose of SSW energy continues to ease as NW remnants linger. The average spots continue in the waist-chest high zone now. Top breaks go bigger on occasion.]