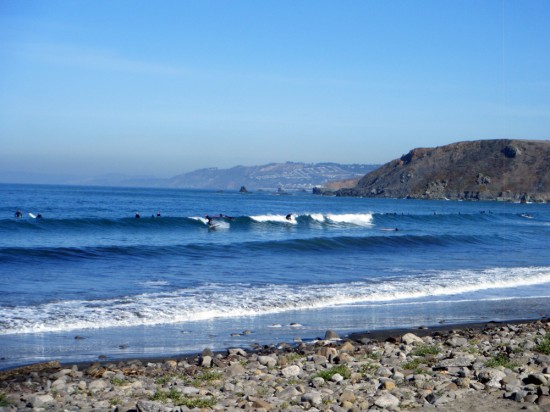 Happened to catch a shot of Rick going right.

Didn’t even bother to check the cam and sped down to LM this morning before a client call. Conditions looked good when we arrived with waves lined up and rolling in towards the middle. The weather was a perfect 70-something and it was sunny again in Pacifica. October has been awesome weather. Max was on his Harbour board again today, giving it a go since his shoulder is getting better. There was a sizable lineup but friendly. A surfer next to me said she’d been out for two hours, was exhausted but couldn’t go in because it was too good. With that, Max and I turned and caught a party wave together. The next one was a fast right. I looked down the line and could see the baseball hat guy coming left but with enough distance that I wasn’t concerned. I went right and then left before ending the ride. Surprised to land in a kelpy sea forest at that part of the beach. There were some big ones to paddle over on the way back out. About half and hour in, I had just gotten a wave and was paddling out next to the girl surfer from earlier when a large wave broke on the outside where we were previously lined up. The next one came in closer right in front of us. I made it over. She came up and went “whoa! What was that?” “I think the sandbar just shifted!” I said. “Here comes another one!” Back on the outside, I paddled for one but missed it. Turned around to see the next wave of the set coming right at me. Pivot the board, paddle three times, popup and go right. That one sticks in my memory because I was in perfect position and timing. Felt so good. Wish we had more time to catch more waves, but it was great to get out!

[2-3 ft + knee to chest high. POOR TO FAIR CONDITIONS. Afternoon report: Nice conditions early this afternoon, but the big high tide has it looking pretty soft and slow. Keep an eye on things as its been getting fun on the lower tides later in the day the past couple days.Very rideable, but not much punch. Look for improving surf with a bit less tide.]