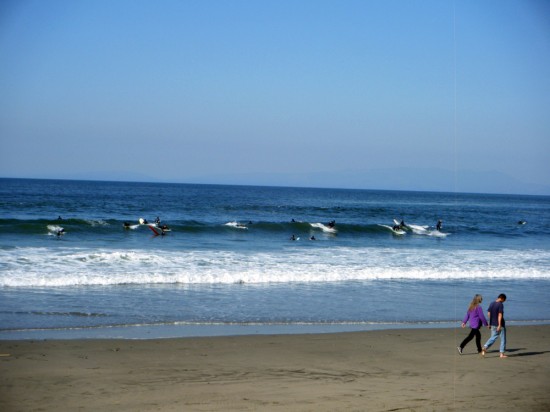 Waves were too mixed for any real lineup.

We had meetings and work today and saw positive surf reports come in this morning from friends on Twitter between 9am until noon. Max I were done with our calls by around 1 and headed down to the break but conditions were getting messy – tide was dropping and it was mostly closeouts and slosh. Still, it was a sunny, Friday afternoon and the only thing as fun as starting the day with a surf is ending it with one. A giant flock of birds was floating around on the outside of the south end. From south to north, the waves were breaking practically on the beach and the outside was a sea of rodeo waves. It was fun to sit on my 9′ Harbour and just feel the slosh and double waves. We caught a few odd short rides and laughed about them. Once you popped up, the wave had already broken and crashed into the shallows. The other sections were mostly closeouts. Set waves were unclear. The question of the day was is this a wave? They looked more like what I’ve seen of windswell lake waves. Still good to get out, but I’m looking forward to a rising-tide morning surf tomorrow. Let’s hope for glassy and some power :)