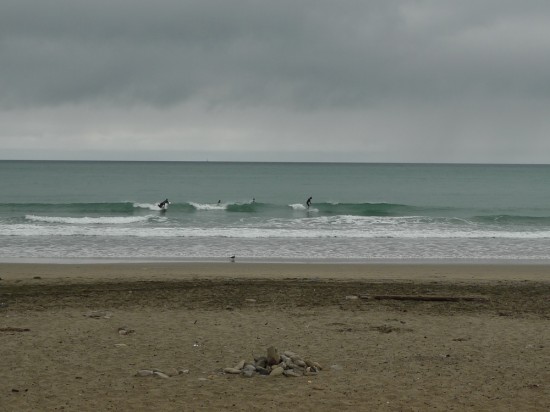 Before the rain and wind.

Haven’t been down to the beach for five days. We went to LM on Saturday, a sunny, beautiful late morning, only to suit up and discover I had a ding on the right rail near the tail on my Harbour. It must have happened at the end of the last session while I was paddling in among closeouts. Had to bail off my board a couple of times and it must have hit a rock on the bottom or something. Didn’t want to risk getting it waterlogged so we didn’t surf, texted Luke for the name of his repair guy. Luckily, Patrick was available to check out the board so we headed down to Half Moon Bay to drop it off. Didn’t surf Sunday or Monday and went down Tuesday to check things out in the morning. It was a mess with the low tide and mixed swell. Chatted with Greg who said to come back in the afternoon when the tide filled in around 1:30. Just then, Patrick called and my board was ready so we didn’t surf again but went to get my board. The past week, tide has been at the wrong times in the morning and conditions mixed. Instead, we worked and watched the Ripcurl Search event at OB online and saw Kelly win his 11th world title. The pros were impressive. Fast forward to today and we just had to get out.

It was nearing low tide but when we arrived, it looked clean and calm with small waist-high peelers. Fun! By the time we were ready to suit up, the rain started drizzling and wind started to pick up. Paddling out was fairly easy but the wind was already creating texture on the surface and bumps between waves. I bombed my first two waves simply because I misjudged their power. They seemed like they would be mushy but weren’t and I was too far forward on my board. The next one I got was a fairly sizable drop with a quickly breaking wave behind me. I found some room to turn right and ride it for a bit. Got two other smaller waves before conditions became too blown out. All chop and wind whipping the rain so hard we really couldn’t see. By then, there were only about five other surfers out. Think we saw Thomas Meyerhoffer in the water and getting out afterwards carrying one of his pill boards. We unsuited to pelting rain and wind but still had a great time. Winter is coming!

[2-3 ft knee to waist high. POOR CONDITIONS. REGIONAL SUMMARY: Surf is not looking so good this afternoon with small, leftover NW swell and minor SSW swell setting up mainly waist-chest zone waves with some shoulder high+ sets at top spots. Winds are onshore though and conditions are generally poor with some rain showers moving through the region as well.]